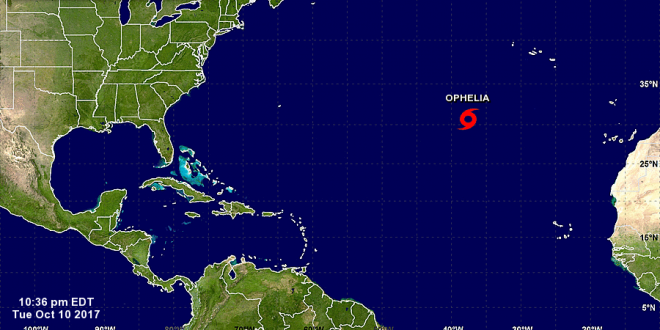 Hurricane season is still in effect until the end of November and is currently doling out two storms: Nate and Ophelia.

According to CNN, the 2017 hurricane season is currently ranked as the most active since 2005 . The 2017 season has already spawned 14 named storms, nine of which became hurricanes with five of those being hurricanes higher than Category 3.

CNN also said that it would take two more consecutive storms during the 2017 season to beat 1878’s record of 10.

In the 11 p.m. Oct. 10 public advisory, the National Hurricane Center said that Tropical Storm Ophelia is moving southeast at 6 mph with maximum sustained winds of 50 mph. It also stated that while there are no coastal watches or warnings in effect, Ophelia is looking to become a hurricane by Thursday.

Ophelia is currently in the middle of the Atlantic Ocean.

“Nate is expected to weaken further as it moves northeastward this afternoon through the lower Great Lakes region,” the Center said.

The Center also said that moderate to heavy rainfall will carry on across the northeast and portions of the eastern mid-Atlantic regions. Citizens in those areas will have to look to their local National Weather Service office for possible watches, warnings and specific information pertaining to that area.

Although Nate has died down, it left destruction in its wake. According to CNN, Nate initiated flooding and knocked out power for 67,000 homes across the Gulf Coast with most being in Alabama.

CNN reported that Nate also caused a total of at least 28 deaths between Costa Rica, Nicaragua, and Honduras on Thursday. Hundreds had to be rescued from flooding and mudslides, while many others lost power and running water.

CNN meteorologist Jennifer Varian said that if Ophelia and Phillipe (the name for the possible next storm that will appear) become hurricanes, we will break the 1878 hurricane season record for most consecutive hurricanes.