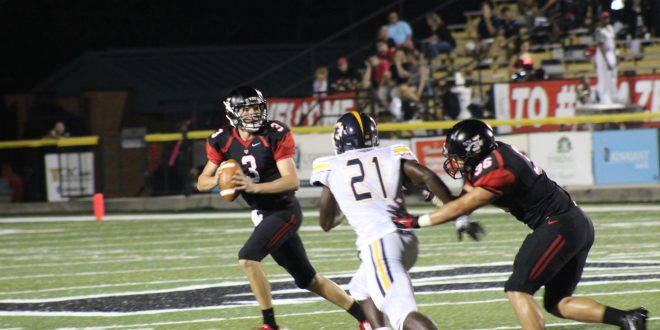 Blazer football will likely have to rely on the passing game heavily to beat the Statesmen.

Blazers need the long ball to upset No. 19 Delta

A strong passing attack may be just what the doctor ordered this weekend for the Blazers.

The Blazers will travel to Mississippi with intentions to upset the No. 19 ranked team in the nation, Delta State. The Statesman are 6-1 on the season and are the second seed in the Gulf South with a 4-1 conference record.

Quarterback Rogan Wells and the VSU offense will have a tough night mixing up the offense against Delta State. The Statesman have a daunting run defense that is ranked No. 7 in the nation and has only allowed 523 yards rushing over the season, the lowest allowed in the conference.

While threatening the run game, the defense is also proven to pressure the quarterback by racking up 22 sacks and 10 interceptions on the season.

“Physically we’ve got to move the line of scrimmage,” Head Coach Kerwin Bell said. “We’ve got great movement up front, but this team is really tough to run the football against. A lot of it is because they add the extra man in, and keep it short on the back end so we’ve got to be real good in the box and communicate. I think if we do that, so get a hat on a hat, I really like our chances of scoring points in this game.”

There is a kryptonite for Delta State’s defense though, and that’s defending the passing attack. With over 1,700 yards put up against them through the air, Delta State is the worst passing defense in the Gulf South.

With the Blazers quarterback putting up the best rushing average for the team, attacking with deep throws could be the game breaker.

The Blazers tend to be a heavy pass offense already, but going deep hasn’t been there for them this season. The longest completed pass by Wells has been 29 yards, and 37 yards is the longest completion from the backup Adam Robles.

This game could be the one for the Blazers explosive receiving group to become more involved.

Good news for the Blazers: They’re getting a couple of key players back from injury.

Defensive end Josh Ealy will be back in the lineup, and Bell thinks he’ll also see starting left tackle Brandon Kemp return this weekend. His status is still questionable, though.

This matchup last season was a lopsided 56-27 win for the Blazers at home. The Blazers will make the trip to Cleveland, Mississippi and play Delta State in Parker Field-McCool Stadium on Saturday at 3 p.m.