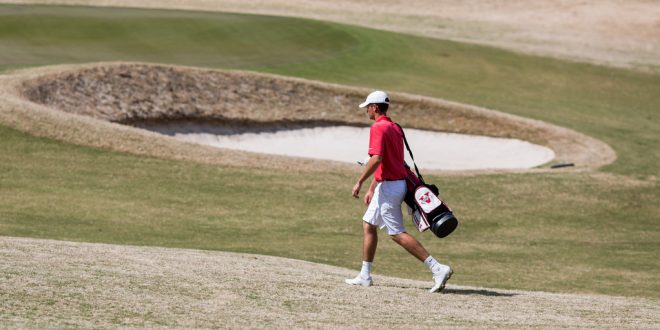 Blazer Golf is working through the hardships of their fall campaign but they have many positive aspects to their season.

With just one tournament left in their fall schedule, VSU’s golf team has had a disappointing season so far, but can point to several positive developments moving forward.

The team just came back from the 2017 Copperhead Championship in Palm Harbor, Florida, played at the famous Innisbrook Resort.

“Copperhead was awesome. It’s a great golf course. Anytime you get to play on a course that the pros play on is a tremendous honor,” Head Coach Jared Purvis said.

After the first day of the tournament, VSU sat in fifth place, a very strong showing.

“We set ourselves up to contend with some of the top teams in the country. The first day we played some good golf, and made very few mistakes,” Purvis said. “Unfortunately, when the wind and the rain moved in, we didn’t handle it quite like we should.”

The team placed in the ninth spot out of 15 teams by the end of the tournament.

The golf team as a whole had a rough time in their last three tournaments.

Sept. 19, the Blazers placed eighth out of 15 at The Griffin at Saint Leo in Florida.

The next week, Sept. 26, the team had another difficult outing, and placed fourteenth out of 18 at the Cougar Invitational in Columbus, Georgia.

Despite performing below expectations, Purvis still has high hopes for the team.

The team is continuing to show improvement,” he said.

As a team, they are going to need to improve some more to move up the ranks.

At the Copperhead, the team would have had to make up seven strokes to just tie Barry College in the eighth spot.

To be at the top of the pack, the team would have had to make up 32 strokes.

In golf, anything can happen, but it’s going to take a lot of work to make up 30-plus strokes in a tournament.

One of the bright spots for VSU has been Matt Anderson, a junior from Lakeland, Florida, who tied for the twelfth spot in the tournament.

Anderson is averaging just about par at 72.44 strokes per round, which is the best average on the team.

“I felt very comfortable with the course. I was out there every year watching the professional golfers play at The Valspar Championship,” Anderson said. The Valspar is an annual stop on the Professional Golfers Association Tour.

“A lot of knowledge of a course makes it easier to play,” he said.

The golf team has a two-day tournament starting on Oct. 30 at the Miami Intercollegiate Tournament in South Florida. After that, the team will not play again until February.

Previous Editorial: Saturday classes should not be mandatory
Next Andrew delivers conference playoffs in first season