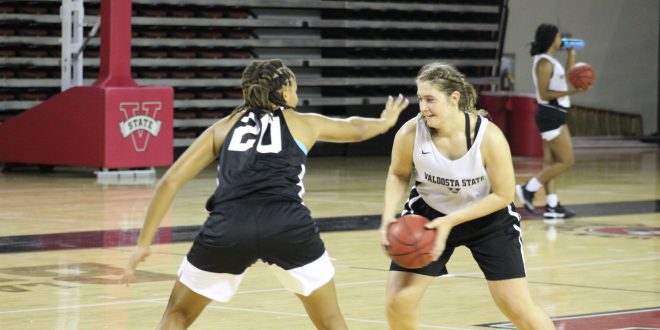 The VSU Lady Blazers open their season at home against Fort Valley in the GSC/SIAC crossover tournament this weekend.

The VSU Women’s Basketball team brought home their third championship last year, and Friday marks the start of the road to the fourth.

The VSU Lady Blazers top the preseason conference polls, as voted by the league’s head coaches. In last year’s preseason poll, the Lady Blazers were predicted to finish the season in ninth place.

The ranking isn’t a surprise after the way they capped off conference play last season.

The Lady Blazers were off to a hot start in the championship game, leading 11 points a few minutes after the opening tip off.

GSC Tournament MVP Madi Mitchell led the game scoring 28 points on 11-19 shooting from the field. Mitchell’s offensive ability wasn’t just displayed in the championship game, as she finished the season as one of the leagues top five scorers averaging 16.6 points per game.

“Bringing two seniors back with a year of experience under our different coaching style and level of expectation will be a big boost for us,” said VSU Women’s Head Coach to VSU Athletics. “Kenya and Madi have both taken on leadership roles with this team and I think they both know what they want out of their teammates this year. I couldn’t be more excited for those two.”

Kuhns won 22 games for the program in her first season as head coach, marking the first time VSU won more than 20 games since the 2011-2012 season under former Head Coach Kiley Hill.

Prior to VSU, Kuhns held an assistant coaching position at Belmont for six years, where she helped lead the Bruins to an Ohio Valley Conference Championship during the 2015-2016 season.

Kuhns was named to the illustrious GSC All-Decade Second Team for her impressive career as a student-athlete at VSU from 2004 to 2008. She was inducted to the Blazer Hall of Fame in 2015 and owns the record for most three-pointers made with 262 all-time and most in a single season with 91.

Kuhns can now improve add to her statistics from the sidelines. The last time the Lady Blazers won back to back championships was 1984.

This offseason she had the opportunity to take advantage of the full recruitment period. The Blazers added a few new faces to their ranks that will add depth to a team that is returning all of their starters.

Among the list of newcomers throughout the GSC, senior transfer Taylor Buie, freshman Abby Rouse and Kayla Bonilla make the squad. Buie is a WBCA All-American honoree from Nova Southeastern, Rouse is a forward from Macon, Ga and Bonilla is a point guard from Columbus, Ga.

The Lady Blazers will play their first official game at home against the Wildcats of Fort Valley State on Nov. 10 at The Complex. The matchup will be part of the GSC/SIAC Regional Challenge, which will also feature Albany State and No. 2 seeded West Florida.