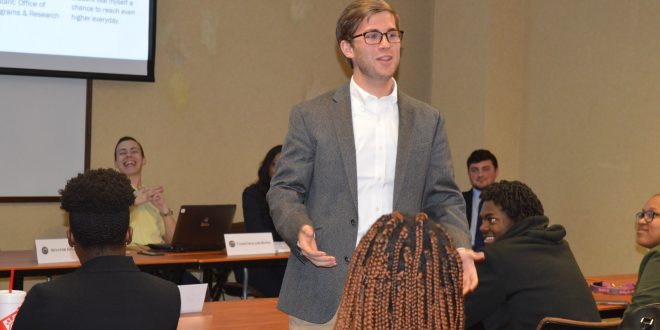 Hall said his interest in becoming a senator stems from his belief that individual effort is what shapes college experience. Because of this, he has always tried to volunteer or participate in areas that he’s interested in. Hall said he was a member of SGA at Bainbridge State College.

Once sworn in, Hall plans to “foster more of a collaborative effort between graduate and undergraduate students.” Hall also wants to make sure that all graduate students know there are still ways for them to be active on campus. He’s also interested in becoming a part of the financing committee.

Hall is especially enthusiastic about the undergraduate symposium.

“It’s a chance for graduates and undergraduates to interact and expose each other to what is possible for the future,” Hall said.

The senate is excited about the new addition as well.

“This is a great opportunity for our SGA in particular to kind of shed some light on some gray areas of how we can help out the graduate community,” President Maya Mapp said.

Hall received his bachelor’s degree in political science from VSU along with a minor in women and gender studies. He is currently seeking a master’s degree in public administration

Hall is also a part of several on-campus organizations. He is an honorary member of the Young Democrats of VSU, the vice president and treasurer of the Association of Graduate Students and he works as a graduate assistant at the Office of Sponsored Programs and Research Administration.

Hall is encouraged about the outcome, and he wants students to know he looks forward to what lies ahead for both graduate and undergraduate students.

President Mapp reported that the Board of Regents officially approved a new major for VSU which is a general health science major. She said this major could serve as an alternative for those who couldn’t get into one of the several health or athletic programs VSU has to offer.

At the end of the meeting, SGA said it will send out an email reminding students to attend the final meeting of the semester.