Home / Opinions / What’s Your Take: Skipping Town for the Pros 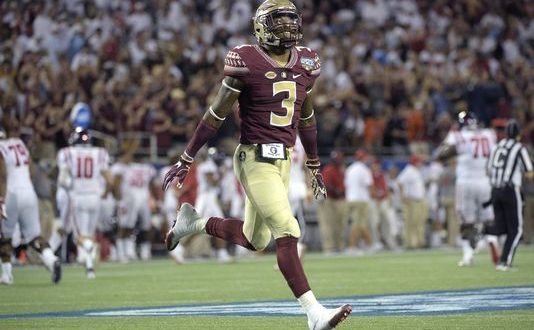 Derwin James is forgoing his final game at Florida State. James is a future NFL draft pick and is following a growing trend by college athletes.

What’s Your Take: Skipping Town for the Pros

Star prospects, Derwin James and Deshon Elliot, of Florida State and Texas declaring for the 2018 NFL Draft and skipping their team’s bowl games, the question has been posed if players should sit out their team’s finales.

Yes, we were always taught to finish what you start, but this is a different matter. These players have millions waiting on them in the NFL. James is projected to be a top-10 pick, while Elliot is expected to be drafted in the second round.

Most bowl games that teams compete in is just a big check for the school, which the players will never see. Bowl games are practically seen as useless if it is not for the national championship. It is just a cash-grab for the NCAA and participating schools. Come on, who’s watching the Belk Bowl?

When I think of players forgoing their bowl games, I think of current Dallas Cowboys Linebacker, Jaylon Smith. Smith was once looked at as the best linebacker in the 2016 Draft Class until he tore both his MCL and ACL in the same knee in the Fiesta Bowl on New Year’s Day in 2016.He went from a projected top-10 pick to a second-round pick by the Cowboys.

The Fiesta Bowl was for a National Championship berth, but it shows that even the top of the college pedestal is not worth getting injured and costing the players future money and longevity of their career.

I feel that the players should not be obligated to play in the bowl games if they have intentions to get drafted and play in the NFL. Once they declare, the team should understand that they are trying to move up in the ranks.

Current NFL rookies, Leonard Fournette and Christian McCaffrey took heed to this trend a season ago. There is no problem when coaches are looking for new jobs during the season, so why is it a problem when the players want to prepare for their next gig?