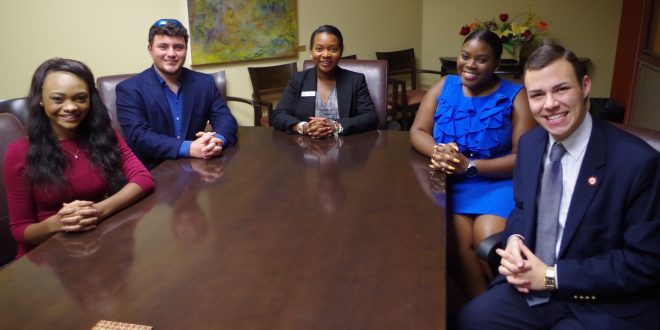 With the third week of the spring 2018 semester in the books, SGA has begun to settle into the swing of things.

The first resolution of 2018 concerning the implementation and scheduling of energizer booths was unanimously passed.  These booths are aimed at collecting student suggestions and feedback to foster student participation and usage of the many university amenities at their disposal.

The meeting’s proceedings began with a presentation from Shawn Phippen, director of campus recreation, on behalf of the rec center.  Phippen provided updates on the current affairs of the Rec Center including the need for roof repairs and the status of ongoing refurbishments to the Rec Center.

A lobbying committee comprised of many different student services, including Athletics, Student Union Services and Parking, will be lobbying for the approval of a $30 fee from all fee-paying students to cover the cost of remodels and future endeavors.

SGA President Maya Mapp stressed the importance of member feedback regarding the fee.

“At the end of the day, this is our money and we have a say in how those funds are allocated,” Mapp said.

The Dining Hall is currently under a 5-year contract that prevents any competing vendors from selling on campus locations including the Rec Center.

The details of SGA week were laid out to the committee, also.  The event will run from Jan. 29-31 and feature opportunities for members of SGA to interact with those on campus and build a relationship with the student body. The first day of SGA will be dedicated to establishing a presence on campus, so members are encouraged to wear their black SGA polo t-shirts while on campus.

The second day of SGA week will center on community service.  SGA has partnered with the Boys and Girls Club and will host an outreach event on Jan 30 at the Toombs Street location.  Members of SGA will speak with the youth about the importance of student government and assuming leadership roles.

The third and final day of SGA will have a health and wellness focus.  Members of SGA will post at different locations on campus including the Student Union and Pedestrian Mall to pass out bottled water and granola bars.

Relay for Life is also gearing up for its April fundraising drive.  Campus organizations will be able to compete during the fundraiser in order to win 10 percent of the proceeds.  Those who decide to participate in the drive will get a handful of candy in return for their $1 donation.  They will also be entered into a raffle for a week-long parking pass.  The pass will permit students to remain in a timed parking spot past the allotted amount of time.

Previous Helium balloons may be grounded by Faculty Senate
Next Editorial: Hey VSU, enough with the emails