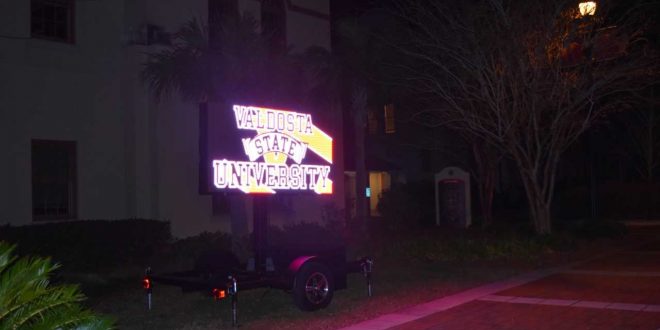 Members of the VSU community, along with a good portion of Valdosta commuters, have probably noticed a flashy new electric sign popping up around campus.

In early January, the new sign was first positioned on the lawn in front of the Student Union at the intersection of North Oak Street and Baytree Road.

The first message that was broadcasted at this location said, “Welcome to all returning students,” as they crossed the street from the Oak Street Parking Deck.

According to Robin Vickery, VSU’s director of Student Life, the sign is another way to inform the community.

“The idea behind the sign was to help with the promotion of Student Life or university wide events,” Vickery said.

The sign has since been put to use doing just that, broadcasting a message about an upcoming concert by the hip hop artist Waka Flocka, scheduled for Friday, Feb. 9.

Late Wednesday night the sign flashed a message regarding chances to win backstage passes and other prizes, boasting a chance with “every ticket sold.”

The sign is portable, so it can be moved “based on need,” Vickery said.

Students have seen its portability firsthand as it’s now positioned on the mall near Nevins Hall, where it has been for more than a week.

While the sign is getting noticed by students, it may not be a hit with all of them. Some students have expressed frustration over whether or not the sign is necessary or even an effective use of funds.

“I don’t like it,” Chloe Czarowitz, a sophomore English major, said. “I think it’s a waste of money. Almost everyone on campus has a better way of getting information than that sign.”

“I don’t really care for it,” Hampton said. “Behind Nevins it seems really off. I just don’t care for it.”

The students will probably have to get used to it because it seems the sign is here to stay.