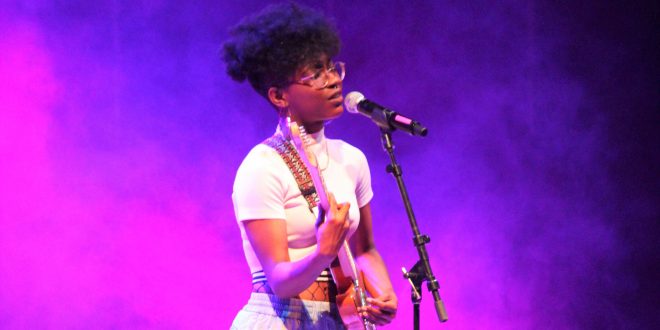 Rosser grew up in and was exposed to church and gospel music at an early age.

“I loved the harmonies and the spirit,” Rosser said. “I sang at church more often the older I got. I loved singing on our “Praise Team” of 9 people and I appreciated solos. I was in chorus 6th-12th grade.”

Though Rosser may be known for her opera selections, she listens to all kinds of music.

“Classical, Hip Hop, Metal, Indie, Pop too. I want to get into Jazz more,” Rosser said. “I will say though, I don’t listen to country unless it’s Shania Twain.”

As an opening act for Waka Flocka Feb. 9, Rosser was excited about her performance and the show in general.

“Why would anyone with talent pass up a chance to open up for Waka Flocka Flame?” said Rosser “It’s a private concert, but still. Bragging rights. Also, a chance for me to share my joy with singing. I really do love to sing.”

Thought she believed it would take longer to hear something back, she was surprised she heard anything back at all. Once she received word of the upcoming opportunity, Rosser was so excited and called her friends, family, and loved ones immediately.

Music has always been her first love and through her YouTube channel she really enjoyed playing songs that she felt she could do justice.

“I rarely posted videos in high school and deleted almost all that I did post,” Rosser said. “My sister has a friend who is a professional videographer and he always told me to contact him if I wanted to record and he’d do it for free because he believed in me. I felt like I sang Pillow talk by Zayn and Consideration by Rihanna and SZA pretty well but also in my own way, so I had him record me.”

Her video covers like Rihanna’s Consideration is the second most viewed video on her channel and since then, she has kept posting whenever she has time and finds a song she likes.

For Rosser, performing is only fun when she does well. Even on bad days, it pushes her to work harder than before and analyze her mistakes.

“I want to sing perfectly all the time and I would love for my audience to act how I pictured them in my head but, it’s not always like that,” Rosser said. “I want it to be and it can be, the more opportunities I take and the more I practice.

Previous NAACP celebrates Black History Month with the “N Word”
Next People Poll: How do you feel about the new Snapchat update?