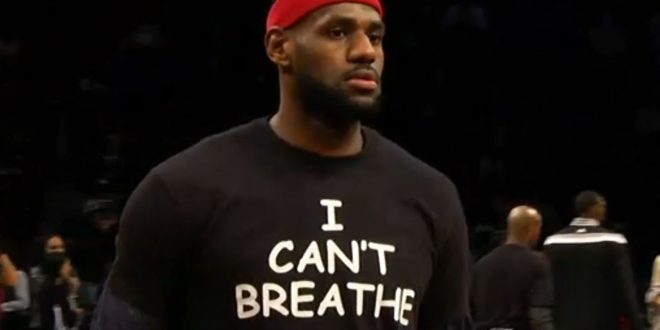 LeBron James has always expressed his opinions on social issues and after this latest war of words don't expect it to change.

In an already divided country, race became a topic of discussion during NBA All-Star weekend.

LeBron James had an interview with ESPN’s Cari Champion where he expressed his displeasure for Donald Trump and gave his take on experiences of being a black man in America. Those comments were met with, comments by someone who is unaffected by the hardships of being black in America share their heinous comments.

Partnering with Kevin Durant, James joined Champion in an interview that sent shockwaves across the nation. James shared that as a black male, he feels the hate for making decisions that he feels is best for him. “Because people can’t make the decision for you, the only thing they can do is began a rally of hate,” James said.

James feels that President Trump does not understand the people. Durant used a basketball analogy, stating that our team in this country isn’t ran by a great coach.

He stressed the fact that just because he is a black man with money, it does not make him numb to the hatred he receives. Last June, he had the word “n*gger” spray-painted on his gate at his Los Angeles home during the NBA Finals.

Everyone wasn’t fond of James’ comments. Fox News host, Laura Ingraham called James’ comments “ignorant,” and belittled him for skipping college to go pro and instructed him to “Shut up and dribble.” Ingraham received much criticism for her divisive comments, and attempted to backtrack the statement, saying it wasn’t about race. So, what were you trying to imply?

As Ice Cube once said, “Here’s what they think about you.” James is a United States citizen just like Ingraham. Just because he didn’t attend college means that he can’t speak on politics?

This is how it goes. It seems that no one will ever understand what people of color go through on the day-to-day basis. Now you wonder why people won’t stand up for the anthem. Problems always go unchecked and swept under the rug, with the majority trying to justify why it is happening.

As a black male, I believe we have a target on our back and our advancement will always be stymied. I don’t understand what we have to do to progress in this country without being knocked steps back. We then express our feelings then we are told to “shut up” or “get over it.”

Just because we are black and some of us have some type of monetary advancement, people think that soothes us and we should not say anything.

Will green paper in our bank account shield us from oppression or getting shot down in the streets? We are always reminded that we are under the majority every chance possible. I’m not just speaking for black folks, I’m speaking for all minorities. It’s something we won’t accept and will just have to continue to fight.

Division in this country will be its downfall. Sooner or later, it will catch up. I want all people to come together and work together, but if we are continually prompted the idea that we are nothing, it will cause nothing but war.

It is understood that we are all under some sort of stress due to the ...