Home / Sports / Column: Consistency can give Blazers advantage in post-season 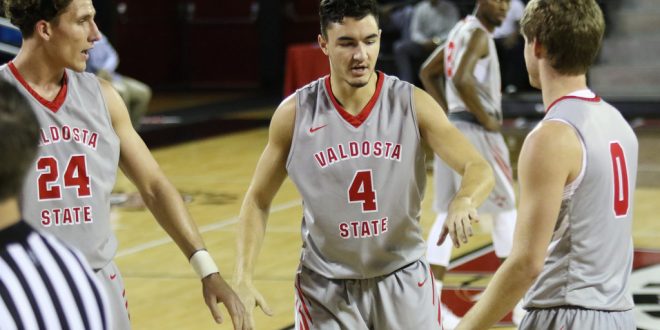 The VSU Men's Basketball team enters the post season with the cards stacked against them but they bring a playing style that could pay off in the long run.

Column: Consistency can give Blazers advantage in post-season

In sports, some teams are one dimensional, lacking the ability to produce in a variety of areas. This season, the Blazers, ranked atop the Gulf South Conference, have proven to be multi-dimensional.

The first dimension is the most evident: scoring. The Blazers have done an excellent job of putting the ball through the net at a high volume. The Blazers ranked No. 1 in the GSC for scoring, pilling in about 93 points per game.

GSC Player of the Year Beau Justice was a huge contributor to the team’s high-octane offense as he led the team in scoring with nearly 22 points per game. Justice’s best game was against West Georgia on Jan. 20, where he scored a career-high of 40 points.

Last season, Justice averaged 14 points per game while being the second option to former VSU star, Jeremiah Hill. Hill brought home the GSC Player of the Year award last season, making it two-straight for the Blazers.

Their scoring has also given the team a huge boost in the victory column, racking up 26 wins, which is one shy of last year’s win total. To put their scoring in perspective, the Blazers scored 139 points against Montevallo on Dec. 16 in a triple-overtime thriller. Those numbers ranked as the highest point-total in the conference this season.

Junior Winston Morgan played the role of the flamethrower this season, connecting on 100 three-pointers. Morgan became the first Blazer to ever reach the century mark in a single season and eclipsed the previous record holder, J.J. Taylor, who drilled 95 shots from beyond the arc 28 years ago.

On the other end of the floor is another strong part of the Blazers’ philosophy. Paint protection has been an identity for the Blazers all season, and it showed in the conference statistics. VSU ranked No. 3 in the GSC in blocked shots.

Senior Jimmy Kodet was the man lurking the baselines as he has swatted away 51 shots this season. On Jan. 7, Kodet notched a season-high five blocks against Delta State.

KJ James, another senior forward, displayed quick hands as well, robbing opponents from scoring with 34 steals on the season. Justice followed behind with 33 steals.

Lastly, the Blazers showed consistency. Although the team lost four tough games, they kept their composure and didn’t allow the letdowns to overwhelm them.

At the Complex, the Blazers won 13 straight games this season before losing to West Florida on Feb. 22. Also, the Blazers went on an 18-game win streak, going on the road and upsetting fanbases across the GSC.

Some of their consistency transferred over to the playoffs, where they defeated West Georgia in the first round of the GSC tourney at the Complex. They were ultimately bounced from the tournament the following week, losing to Delta State 63-59.

Although the team didn’t manage to win their conference tourney, they go into the NCAA Division II tournament highly ranked. If they’re able to put their many dimensions on display, they will have a good shot of going far in the post-season and enhancing their reputation across the nation.