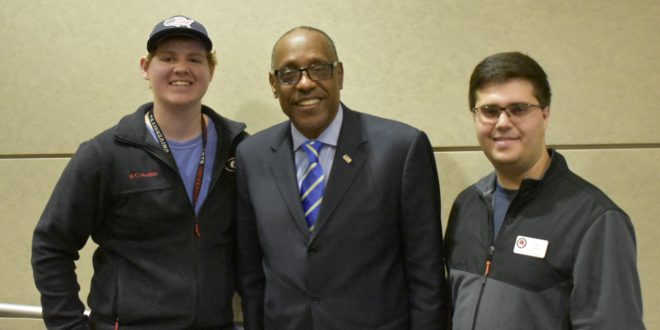 SGA senator, Tyler Tucker, plans to get VSU students more involved in the community with his mandatory community service proposal.

Tucker’s proposed bill makes it mandatory for students to participate in at least three hours of community service. Tucker said SGA and his high school’s 4-H program influenced him to come up with this proposal.

“Being involved in the 4-H program in my high school career and then getting involved in SGA at VSU, really propelled my interest with civic engagement and community service,” Tucker said. “With SGA, I am able to create service projects for students to get involved with.”

Tucker believes getting students involved will impact the college community in a big way.

“Being involved with any type of service project will allow students to network with individuals and community officials that can possibly benefit them in their career,” Tucker said. “When you do the service, you learn about different solutions.”

He was involved in community service for most of his high school and college career. Throughout this past year, Tucker worked with the Emerging Leaders program as well as other service projects organizations around VSU put together.

“I love doing this,” Tucker said. “It’s beneficial to anyone who puts their effort into it.”

Tucker is currently awaiting a response from the Board of Regents of the University System of Georgia. He feels the next step is starting a petition for students to sign.

“This petition will help students get more involved,” Tucker said.

He also plans to set up meetings with VSU President, Dr. Richard Carvajal, and other administrators here at VSU to get more support for his proposal.

Tucker would like this project implemented throughout all universities and colleges in Georgia.

“We’re in a communications degree that’s going to require us to be a part of engaging with people constantly,” Allen said. “I feel the community service really fits in well with what we’re trying to do, and it enforces us to apply our communication skills and our people skills altogether.”

“I think it’s a great opportunity for our community to get people more involved,” Bowers said.

Tucker encourages students who want to be involved in the project or the petition to contact him and get more details. He prefers to be contacted through his email: tetucker@valdosta.edu.

Previous SGA announces Department of Student Diversity and Inclusion 2018 budget increase
Next Preview: Walk a Mile in Her Shoes