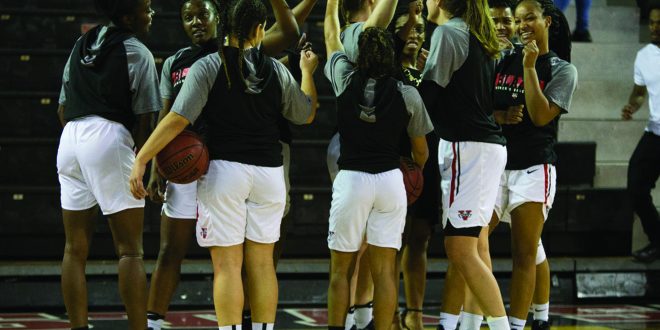 The VSU Women's basketball team is losing three stars to graduation. Kenya Samone' Dixon, Madi Mitchell and Taylor Buie will all be graduating on May 5.

On May 5, VSU’s Madi Mitchell, Kenya Samone’ Dixon and Taylor Buie will be walking across the stage as their final days as a student athletes wind down. Their accomplishments in the classroom and on the hardwood will not be forgotten as they become alumnae of VSU.

“It is a great place, and I will walk around bragging to anybody that I can to say I graduated from here,” Dixon said. “It makes me feel privileged that VSU chose me.”

In their swansong season as Lady Blazers, the trio led the team to a 23-9 record which ranked No. 4 in the Gulf South Conference standings. The Lady Blazers came into the season poised for a repeat after winning the conference championship the previous year, ranking No. 1 in the GSC preseason polls.

Mitchell and Samone’ Dixon were named Preseason All-GSC to begin the year as well. Not only did they begin the year racking up awards, the team found themselves doing activities that were out of the norm for basketball.

“We had a pool workout during preseason, and I found that to be the most interesting thing that I have participated in with the team,” Dixon, jokingly, said. “For me, it teaches you to stay out of your head, trust your teammates and trust coach. I cannot swim. It was a lot of water, but I did it.”

The season was not a resemblance of last year, but they competed and won two games in the NCAA Division II tournament before losing to Union in the South Region Championship.

Dixon has been the model of consistency for the Lady Blazers throughout her senior campaign as she was named Second Team All-GSC to close out the year. Mitchell landed among First Team All-GSC honorees in recognition of a season in which the senior ranked among the top three scorers in the GSC.

The forward from Warwick, Georgia has been a key cornerstone for the Lady Blazers, eclipsing the 1,000-career point total this past season. Mitchell, who is now a two-time honorable mention All-American with the Women’s Basketball Coaches Association, posed a season in which she ranked among the top three scorers in the GSC.

Her scoring prowess ultimately led to a career finish of 1,387 points to become 12th highest scorer in the history of Lady Blazer basketball. This past season, she averaged 18 points per contest which placed her second in the conference and first for the Lady Blazers.

Reflecting on her years, besides stats, her greatest memory at VSU was winning a conference title during her junior campaign.

“It’s like all the hard work you put in just comes with validation,” Mitchell said. “It showed us that everything that we did wasn’t for nothing.”

Dixon, who was always on 2016-2017 championship team, added that the feeling of winning a championship “can’t be put into words.”

“I have never won anything of that magnitude…ever,” Dixon said. “I have won many things as an individual, but it is so much sweeter when you can win it as a team. For the first couple of days, I was in disbelief.”

Accolades and records were broken along the way, but the last memories of the season and tutelage from Head Coach Carley Kuhns will be with them forever.

“Outside of basketball, she has taught me that being genuine takes you really far in life,” Mitchell said. “Just giving everybody your true self.”

Coming from Florida A&M University, Dixon did not know what to expect from the move to VSU. The Baton Rouge, Louisiana native has cherished the time spent with Kuhns, and she promised during her playing days to give her best effort.

“When I got here, I realized why I love basketball, and this is where I wanted to be and should’ve been,” Dixon said. “I don’t mind going out there and giving (Carley Kuhns) everything I can because she is a genuine person, and she makes playing the game fun.”

The high effort that Dixon promised was evident in each game no matter the magnitude. Last season, her combination of strong rebounding and offensive production led to 14 double-doubles which led the team. She led the team with nine rebounds per contest, totaling 291 last season.

In the classroom, Dixon was just as dominant. She was voted to the list of All-Academic honorees after maintaining a 4.0 GPA for both the fall and spring semesters.

She will be graduating with a master’s degree in public administration.

Although Dixon and Mitchell were the one-two punch, Buie served as the wild-card for the Lady Blazers. Just like Dixon, Buie was uncertain of how she would mesh with the new team. Also, she hadn’t built any chemistry with Kuhns.

The ex-Nova Southeastern star solidified herself as a three-point shooter, shooting nearly 40 percent in her freshman year. Coach Kuhns saw those abilities and implemented them into the offense.

“I had just come off of two injuries, and she was always at practice before games telling me to let it fly and shoot the ball,” Buie said. “Basically, at the end of the year, my confidence was there, and it showed in my game.”

The confidence she gained was indisputable towards the end of the regular season. On Feb. 22, the 5-foot-5 guard scored 24 points and drilled a season-high seven three-pointers against West Florida.

“The game on senior night was for sure my most memorable moment,” Buie said. “We had a close game with West Florida who had beat us the first time around. Kayla (Bonilla) drives and passes it to me in the corner, and I hit a dagger three-pointer. The gym just erupted on its most packed night.”

Buie ended the season averaging nearly 11 points per game while notching 65 three-pointers that was a team-high for the Lady Blazers.

She is a veteran in the collegiate game as she has played for six years. In those six years, she has earned two master’s degrees, one in athletic administration and the other in business administration. She will be graduating from VSU with a certificate in public administration.

Even though she only played under Kuhns for one year, she did not hesitate to give high praise.

“Honestly, she is just a really great person, mother figure and a friend,” Buie said. “Each and every player can probably say that they’ve opened up to coach just because she cares about us as an individual.”

“There is already a standard set here, even before our time it has always been about excellence,” Mitchell said. “We want to win championships and I hope the supports keeps growing.”

Buie was optimistic about the future of Lady Blazer basketball as well.

“Who knows what could happen because Coach Kuhns played here and came back to coach,” Buie said. “I love every player on the team, and I hope everyone has success and goes further than we did.”