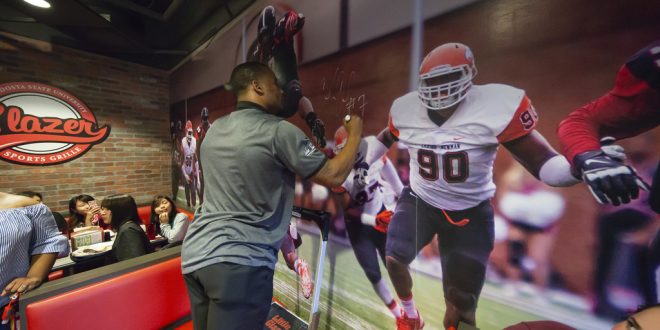 VSU all-time rushing leader Cedric O'Neal signs a picture of himself hurdling a defender in the Blazer Sports Grille.

Former VSU star returns during ‘Dine with the Blazers’

On Wednesday, VSU athletics held their annual “Dine in the Blazers” at the Blazer Sports Grille. This allows VSU students to get up close and personal with the Blazer athletes as seasons are beginning to creep up.

The VSU football team was the main attraction of the event as they are preparing for their season opener against rival, Albany State on Sept. 1. They were welcomed into the Grille by the VSU cheerleaders and an applause from the audience.

Sophomore Defensive Tackle, Joseph Mozone, expressed his enjoyment of doing the Dine with the Blazers event.

“It’s fun just getting out with the students, interacting with everybody and showing that we’re people, too,” Mozone said. “We like to have fun.”

Freshman Safety, Ravarius Rivers, discussed his initial “Dine with the Blazers” experience stating, “We’re trying to get out and meet students and have them being involved and coming to the football games. It’s a fun event to come to.”

Rivers transferred over from Miles College in Alabama a year ago to join the Blazers.

The Assistant Athletic Director, Matt Malone, welcomed a special guest to the event. Former Blazer Running Back, Cedric O’Neal, was welcomed into the grille as he has returned to VSU to complete his degree. O’Neal was a part of the Blazers’ 2012 National Championship team and had a brief NFL career where he spent time on the Philadelphia Eagles and the Buffalo Bills.

The Grille dons a picture of O’Neal hurdling over a Carson-Newman defender in a 2015 First Round Playoff game which ended up being the game-sealing touchdown for the Blazers cementing his legacy as one of the best backs in school history. O’Neal placed his signature on the photograph on Tuesday which he said he had just heard about a week prior to the event.

All-in-all the Meet the Blazers is a good event to rally the students for athletics for the upcoming seasons. The support could play a pivotal part that could lead the Blazers back to the top of the pedestal.