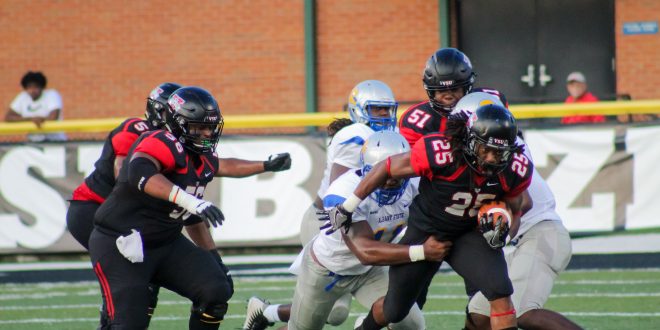 The Blazers tamed the Golden Rams after trampling them 45-14 on Saturday night. It was the first game of the new season and the Blazers came out with some explosion.

“For two years, we had to increase our team speed, especially at the running back position and some of our skill guys on offense,” Head Coach Kerwin Bell said. “We’ve also got some bigger body players now, giving us more depth on both sides of the ball. After tonight, there is no comparison to our team now and where we were two years ago.”

Those statements were proven true as the Blazers scorched the Golden Rams on the ground, totaling 285 rushing yards. Redshirt Freshman Jamar Thompkins was the leader of the pack for the running back group.

Thompkins rushed for 128 yards and a touchdown in the contest. He played a huge role in the team’s win, but he credits the big guys up front for the explosive plays.

“Today, we played what we practiced all off-season,” Thompkins said. “My offensive lineman did exactly what they were supposed to do. I wouldn’t have this success today if it was not for those guys.”

The Blazers young running back just followed his lineman and kept moving. So much so that he wasn’t worried about the stats he was putting up.

“No lie, I did not know I even had 80 plus yards until I looked at the jumbotron during halftime,” Thompkins said. “Once I seen that, I knew that I had to get 100 or more yards. I had to show my teammates that I can do it.”

Thompkins showed his team what he could do, and it led to a big team win. The guy handing off the ball to him had a stellar night as well.

On the night, Wells passed for 176 yards and three passing touchdowns. He ran for one score as well. It was a tight quarterback battle throughout the off-season, but Bell should feel like he made the right choice.

“People do not realize this, but we started Rogan for the last five games of last season and we averaged about 40 points a game on offense,” Bell said. “The first five games without him under center, we averaged only about 20 points per game. It’s a big difference. We knew he had to throw the ball better down the field and he worked on it all off-season for us. He is now throwing it the best that I have seen.”

Wells connected to Sophomore Brian Saunds twice in the contest for scores, and he credits those to just working hard in practice.

“We have been watching a lot of film together as a team and we have been learning a lot from it,” Wells said. “During practice we have executed well, so to start fast like we did was really good.”

Like Thompkins, the offensive line played a huge role in the team totaling 429 yards of offense. Wells couldn’t agree more.

“Our offensive line is stout, so when we run the ball the way Thompkins and others did today, it opens up the passing game,” Wells said. “They made this game so easy for me.”

The defense was able to hold the Rams offense to just 14 points. Last season, the Blazers lost in Albany 29-12.

The Rams struggled to move the ball in the air and on the ground. The Golden Rams rushed for 68 total yards while passing for 152.

This is the first game of the season for the Blazers and all signs for them should point upward.

Next Saturday, The Blazers will travel to Waycross, Georgia to play Fort Valley State in the Okefenokee Classic. The game is slated to begin at 7 p.m.

Previous Column: Team of the Year
Next Blazer Soccer Cruises to Victory over ASU