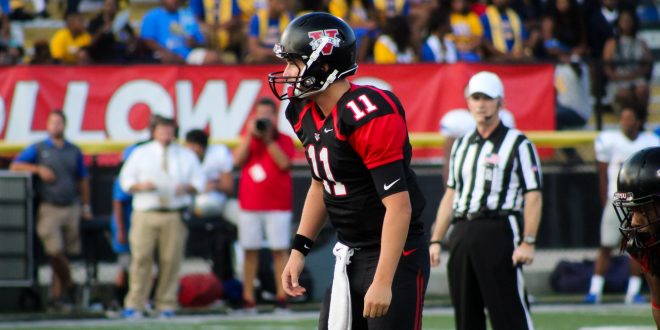 Redshirt Sophomore Rogan Wells rushes for a career-high 97 yards and passes for 227 yards and four touchdowns against Fort Valley State.

The VSU football team exploded for the second straight week, finding the end zone on their first four possessions in the first quarter of the 2018 Okefenokee Classic Saturday evening in Waycross, Georgia.

Last week, they dominated Albany State in a convincing 45-14 win. They followed that effort Saturday, posting 55 points and surrendering only six.

Of the 55 points scored, 28 of those were scored in the fourth quarter alone. Redshirt Sophomore Rogan Wells delivered once again, rushing for a career-high of 97 yards on 11 carries to lead the team, while throwing a career-high of four touchdowns on 20 of 36 for a season-high 227 yards.

In the Gulf South Conference, Wells ranks No. 6 in rushing with 113 yards. He is the second quarterback to crack top 10 in the conference, as his teammate Ivory Durham ranks No. 8.

Wells spread the wealth, throwing touchdowns to four different receivers. On the opening drive, he orchestrated a 69-yard drive that ended with a 26-yard strike over the middle to 6-foot-6-inch Wideout Darrell Myers.

Not only have the Blazers smashed their opponents on back to back weekends, they have done it with effortless style. So far, the Blazers have amassed over 900 total offensive yards, ranking No. 2 in the GSC and trailing Mississippi College by only 150 yards.

The defense was stout against the Wildcats as well, holding them to negative five yards. The VSU defense also held FVSU to negative yards rushing for the half and 69 yards passing, while sacking the Wildcats four times for 34 yards and recorded five tackles for loss for 36 yards.

Altogether, VSU notched a season-high six sacks for 47 yards and 12 tackles for loss for 57 yards, while forcing two turnovers. Ultimately, the Blazers are solid in the front and back ends, which has suffocated offenses so far.

The Blazers were led by freshman Jameon Gaskin who had nine tackles, four solo and one huge sack for 12 yards and one tackle for loss.

VSU will travel to West Alabama to open GSC play, Sept. 15, before returning home to host Shorter on Sept. 22 at Bazemore-Hyder Stadium.