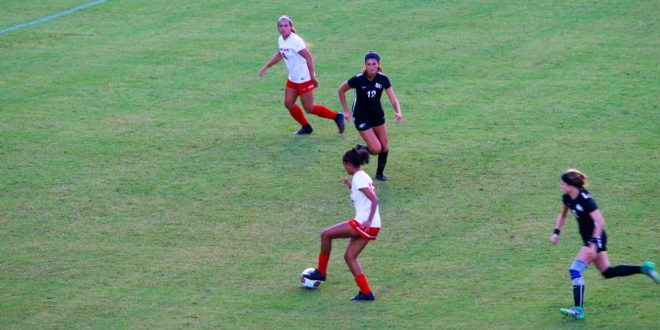 The Lady Blazers will look to improve to 5-1 in the conference and 6-4 on the season, as they will play West Georgia on Sunday.

Valdosta State University Women’s Soccer hosted two conference matches over the weekend and started off on a high note. On Friday, Sept. 21, the Lady Blazers faced off against Spring Hill College (AL), and it did not take long for VSU to take the lead.

Ashley Lewis put away her fifth goal of the season (2’) as the Lady Blazers jumped out to a very early advantage over the Badgers of Spring Hill.

VSU continued to press and keep the ball in the attacking third, and it was not until later in the first half when Ashley Lewis netted her second goal of the match (sixth of the season) off a corner delivered by Suvi Savolainen (36’).

The Lady Blazers took their 2-0 lead into halftime, and once the second half started, it took Mallory McDaniel just seven minutes to find the back of the net after an assist from Ashley Lewis (52’).

“I think we can probably be a lot better in front of goal,” Andrew said. “I think getting the second goal really helped us and gave us a little cushion, then scoring early in the second half let us go through the motions to prepare for Sunday.”

The following Sunday, September 23, the Lady Blazers hosted their second home match of the weekend against a more formidable conference opponent. The University of West Florida (#8) looked to stay in the top ten as VSU had a rivalry upset in mind.

In the first half, the Lady Blazers held the Argonauts to zero goals on eight shots as goalkeeper Caroline Embler came up big with five saves. The second half started off well for the Lady Blazers but quickly began to unravel after the 60th minute.

In just under eight minutes the West Florida Argonauts netted three goals (60’ 62’ 67’) to topple Valdosta State 3-0 in a dissappointing second half performance. VSU tallied six goals on the day and just one corner kick.

Sunday’s home loss gives Coach Andrew and the Lady Blazers room to improve before their next home matchups on Sept. 28 & 30. On Friday, Sept. 28, VSU looks for another victory over another GSC opponent, Alabama-Huntsville, and then quickly prepares for another conference test against the Univerisity of West Alabama Tigers on Sunday, Sept 30.

The Lady Blazers will look to improve to 5-1 in the conference with wins this upcoming weekend.

Previous Blazers ascending in the AFCA Coaches Poll
Next ‘Be there for the big things’: Bell looks to a philanthropic future