Home / News / ‘Be there for the big things’: Bell looks to a philanthropic future 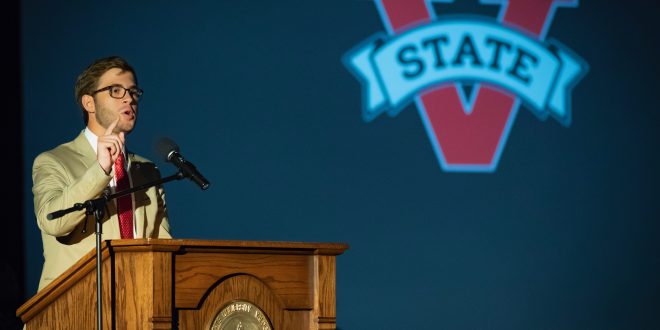 SGA President Jacob Bell tries his best to not let the obstacles in his life affect the way he lives it.

‘Be there for the big things’: Bell looks to a philanthropic future

It’s a hard job juggling school, work and organizations, but regardless of the struggle, Jacob Bell hopes to leave a legacy that inspires others to the same drive to see room for change.

Bell’s greatest concern has always been others and making sure they have an outlet to feel heard and valued; however, this concern has not always been given to him, especially due to his mild disability.

“It negatively affects my depth perception and ability to see things coming towards me quickly,” Bell said.

Like most people with disabilities, Bell has had to face both personal and social consequences. His nystagmus made many early childhood interactions with other kids difficult.

From his earliest memories Bell can recall conversations being interrupted by questions like: “What’s going on with your eyes?”

With support from friends and family, Bell was able to understand his condition and, over time, learned he cannot allow it to hold him back.

“I’m really thankful for how well they handled my condition early on,” Bell said. “Generally, people have been incredibly kind to me once they’ve come to understand what causes my eye movement.”

Now, Bell, a successful junior economics major, has turned his focus to hobbies such as hiking and philanthropy work. He makes sure nothing slows him down and he is known to be a headstrong leader. But the Student Government President and Wesley Foundation Head said overcoming his disability is just one of many inspirations.

“My biggest inspiration is my grandmother Diane,” Bell said.

As the first female probate judge in the 70’s, he looks to his grandmother as a trailblazer and true inspiration, instilling values of high moral and ethical standards into him.

Always willing to lend a helping hand, the Bell family motto “Be there for the big things,” has helped Jacob apply and challenge himself every day to go above and beyond for others.

“If you need help cutting your grass or if you’re getting baptized and no one can make it, I’ll be sure to be there,” Bell said.
The best people aren’t always the most known, however, Bell believes that his purpose was a God-given gift.

Determined to make sure he is able to serve, lead, and advocate for others, his faith-oriented mindset keeps him involved in organizations such as the Wesley Foundation.

“My greatest fear is wasting my time here on Earth,” Bell said.

Though each day brings a new challenge, Bell embraces each lesson that has come and each connection he has made. Through it all, Bell is able to channel past experiences to understand others who also face challenges they cannot control.