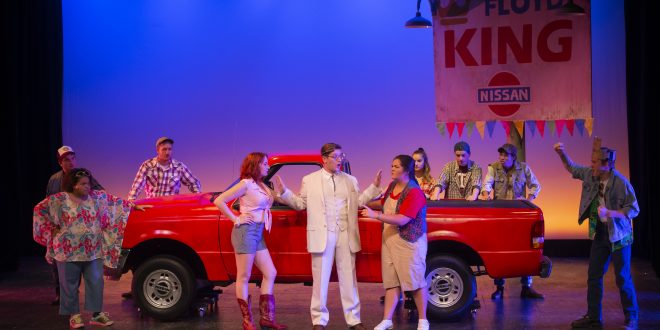 Take a journey with ‘Hands on a Hard Body’

VSU’s Resident Fine Arts Department kicked off their 2018-19 season with the production of “Hands on a Hardbody,” a musical based on the 1997 documentary that was first performed on Broadway in 2013.

This is a story of 10 contestants hoping to win a “hardbody” truck by being the last person to let go of it and drive away with their winnings. We learn about each of their individual lives and driving forces for participating in the contest.

With music provided by Lead Vocalist and Guitarist of Phish, Trey Anastasio, and lyrics written by the talented Amanda Green, “Hands on a Hardbody” has a sincere message coated in familiar Texan culture that really embodies the struggle and determination of life.

Jacque Wheeler, professor of theatre and the director and choreographer of VSU’s “Hand on a Hardbody” said, “Our theme of this season is ‘Journey,’ and this is certainly a journey of these characters, not riding in the truck per say, but certainly around the truck to who wins the competition. There are some wonderful individual stories and diversity in the cast which was important to consider.”

When asked about where exactly the play fit into the seasonal theme, she replied, “The theme of the play, “Hands on a Hardbody,” is what everyone learns about themselves in the journey, and even if they don’t win, they are changed by the experience.”

I can certainly say I was changed by the experience. “Hands on a Hardbody’s” most iconic aspect is, of course, the truck. The vehicle is always on the stage when you sit down before the show starts and when you get up to leave.

It is not only the visual focus of the audience, but the emotional focus of the characters. Everything revolves around this truck. Due to some amazing choreographic decisions, the truck revolves as well! The truck, which is a convincing hollow prop, twists and turns on a set of wheels and acts as a main prop for a majority of the more physically active songs.

The cast and crew of VSU turned an infamous restriction of movement into an amazing visual aspect that had characters using it for dramatic elevation and just plain old dancing.

The cast also deserve a mention. Chosen on the first day of class in auditions, these students of VSU invested massive amounts of their time into getting every single aspect of the play memorized from the songs to the dances to the dialogue.

Each actor and actress deserve mention for their wonderful and emotional moments on stage that left me smiling in amazement. I was already a fan of some of the music I had heard from the “Hands on a Hardbody” soundtrack, but the physical aspect and the way each and every performer showed the audience how they felt with every word really made the soundtrack pale in comparison to the real thing.

Overall, it was time well spent, and I give thanks to all who played a part in the behind-the-scenes aspects. From the costumes, to the music and the beautiful scenery, VSU’s Fine Arts Department has started off the 2018-19 season off right, and I would invite any and all who read this to make sure you find a seat at their next productions which include fall dances in October and a production of “House of Desires,” a Spanish play written by a nun in the 17th century.

Previous ‘Be there for the big things’: Bell looks to a philanthropic future
Next Review: ‘Atypical’ remains humorous while tackling issues