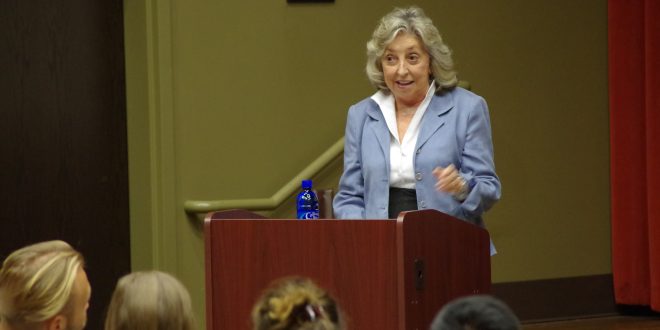 Congresswoman Dina Titus speaks to the audience about her experience in politics and her hopes for the future of politics and women.

When most people think of politicians, many descriptors come to mind, but “female” is rarely among them. Dr. Dina Titus, United States Representative for Nevada’s first congressional district, speaks for just that reason— to remind us of past accomplishments made by women and be the inspiration to empower female millennials today.

Titus spent her childhood here in South Georgia and holds our state closely, but she strongly believes she couldn’t have advanced her career this far as a Georgia Representative.

“Georgia is still very traditional in a lot of ways, whereas Nevada has easily become a frontier that offers opportunity to a diverse population,” Titus said.

Nevada, on the other hand, boasts a more progressive political climate.

“Nevada’s view on woman is particular,” Titus said. “On one hand we glorify show girls and are the only state in the union with legalized brothels, but at the same time, we rank in the top five consistently for the percentage of women in legislature.”

In 2018, Nevada is even set to make history by electing a women majority state legislature.

Recalling Abigail Adams, Amelia Earhart and Rosie the Riveter, Titus said the role of women has changed so much over the years.

“Each of these women led our country to so much progression, and yet their work was either covered by a man or cut short because of one,” Titus said.

Today women are thought to be an important part of society; no longer are we simply raising children and maintaining households. There are women in politics, science and economic professions.

“History has become her-story,” Titus said. “We have achieved a place in that tale and in our nation.”

Titus regaled that not only are women sitting at the table with their name on a ballot, they’re totaling “sky-high” numbers by running campaigns and turning up at the polls.

“This cycle, women are reported to be the most motivated group heading into elections,” Titus said.

For her, women are not a monolithic block, but a strong force to go against.

EMILY’S List, a group that helps women run for office, said they hear from about 900 women on an average year— this cycle, 40,000 women have been in constant contact.

This will shatter the record set in 1992 of 24 women elected.

Out of 254 Democratic nominees, 50 percent are female candidates. Fifteen percent of Republican nominees are women this year.

“Democratic women are seen to make some large gains in two states, Pennsylvania and Texas,” Titus said. “The two Texan women are Latinas and that’s a first on its own, but in addition, two Muslim

women and a Native American, along with the youngest Female to ever run are also campaigning this cycle.”

It may still be challenging for women to run, but as shown in the numbers above, it’s stopping no one.

Titus also noted that ambition is admired in a man but looked down on in a woman, one of the many challenges female candidates face.

“Men apologize for their weaknesses, and women for their strengths,” Titus said. “Men are aggressive, and women are bitchy. Men climb the corporate ladder, and women claw their way to the top. Men are practical, and women are emotional. Men have fire in the belly, and women have buns in the oven. That’s what we’re going up against.”

Women are being elected, but it’s still hard for them to work their way up to leadership positions.

Titus inspired listeners to this end: Women have come a long way, but we still have a long way to go.

Previous Blazers continue ascension in AFCA poll
Next The state of voting: A look at the importance of college voters