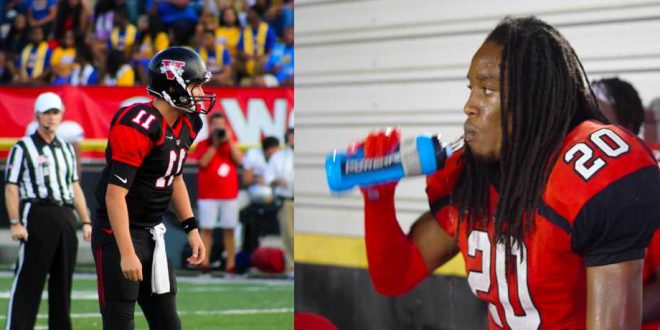 Wells and Thompkins ranks first in the GSC in passing touchdowns and rushing yards so far this season, respectively.

Wells has won the award three times so far this season, but Thompkins is a newbie to the honor.

A Fort Mill, S.C. native, Wells tossed for a career-high six touchdowns and ran for another in the 63-42 victory over the Mississippi College last Saturday, validating his weekly honor.

He delivered in the air and on the ground, throwing for 295 yards on 13 of 21 passing, while rushing for five yards on six carries and a score.

Wells previously earned GSC Offensive Player of the Week honors following the Fort Valley State and West Alabama games, where he accounted for nine touchdowns in the two matchups.

This week marked his fourth career weekly honor in his two seasons at VSU, as he was honored with the Freshman of the Week and Offensive Player of the Week in the same week once last season.

So far into the season, Wells is ranked No. 13 in the nation and first in the GSC in passing efficiency at 168.1, and second nationally in passing touchdowns with 19.

His backfield-mate Thompkins rushed for a career-high 180 yards on just eight carries with two touchdowns.  He had touchdown carries of 68 and 43 yards both in the second quarter as VSU scored a season-high 35 points in the frame.

Along with freshman Seth McGill, he rushed for over 100 yards in the game. McGill had nine carries for 111 yards, meaning the duo amassed nearly 300 yards together.

Thompkins’ 180-yard performance on Saturday moved him to third in the GSC in all-purpose yards at 117.6, while ranking second in the GSC in rushing touchdowns.

The Blazers now have had a player named Freshman of the Week for the past four weeks, as Thompkins became the sixth different Blazer overall to earn weekly player of the week honors and fourth different freshman.

The No. 10 Blazers return home to host Delta State Saturday at 1 p.m. at Bazemore-Hyder Stadium.  The Blazers will be eyeing their first 6-0 start since 2003, when the team won its first eight games of the season.