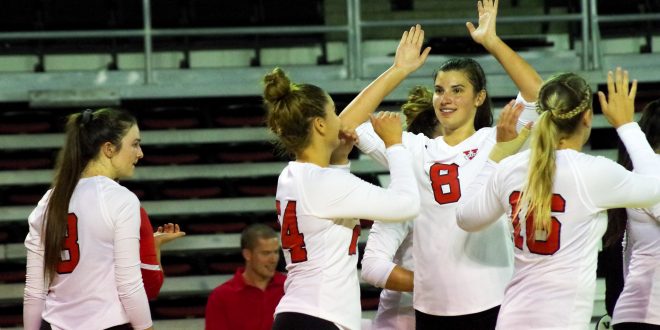 Widera (8) celebrates with her teammates following a 3-2 home victory versus Mississippi College.

Widera and the Blazers had a stellar week grabbing two home wins over Mississippi College and West Alabama last weekend.

The Trinity, Florida native helped lead the Blazers to their first conference weekend sweep in with a convincing 3-2 win over Mississippi College and a 3-1 win over West Alabama.  VSU is now 8-11 on the year and 4-3 in Gulf South Conference play.  They are currently ranked No. 6 in the GSC.

For her award winning week, Widera hit .333 with 18 kills and five errors in 39 swings while recording two aces. She had five digs and recorded eight total blocks with six solo rejections to lead the team.

The Blazers will continue at home this weekend as they host the Lady Buccaneers of Christian Brothers Friday at 7 p.m. at The Complex and battle Union Saturday at 7 p.m.  VSU ends the home stand Tuesday at 7 p.m. versus Georgia College at 7 p.m. ET.