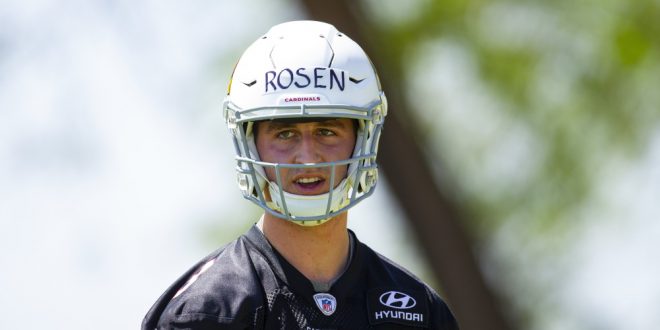 Should Quarterbacks sit their Rookie Season?

It has always been a tradition for teams to draft quarterbacks and sit them their rookie season with a plan of letting them learn from the transition guy playing at the starter spot.

The question has been rekindled in lieu of the ascendance of second year Kansas City Chiefs Quarterback, Patrick Mahomes.

Mahomes sat until Week 17 of his rookie year. He spent the season backing up Alex Smith, who is now on the Washington Redskins. Smith playing style was more of a game manager. Mahomes has proven that he is much more than that.

Through the first four weeks of NFL football, Mahomes has already passed for 1,200 yards and thrown 14 touchdowns with no interceptions, leading the Chiefs to an unblemished 4-0 record.

Alex Smith was not the best quarterback but let’s not sit back and act like he wasn’t a former #1 overall pick in 2005 and wasn’t once a decent quarterback for the San Francisco 49ers under Head Coach Jim Harbaugh’s system before Colin Kaepernick took over. I’m sure he shared some valuable lessons with the young Mahomes before being sent to the Redskins.

It’s the same with Philip Rivers of the San Diego Chargers. He sat behind Drew Brees for two seasons before getting to start his first game. Rivers was chosen fourth by the Giants before being sent to the Chargers to learn from Brees who was approaching free agency in a couple of seasons.

Let’s not forget about the most badass man on the planet, the Green Bay Packers Quarterback, Aaron Rodgers.

Rodgers had to be the most patient, sitting behind a quarterback who had three MVP’s and a Super Bowl ring on his resumé, Brett Favre. Rodgers backed up Favre for three years, but that turned out to be valuable for Rodgers as he got the starter job when Favre went to the Jets in 2008.

By 2011, Rodgers already had Player of the Year honors and a Super Bowl win to his name.

But sitting your rookie quarterback is not always the way to go. Quarterbacks such as Cam Newton, Matt Ryan and Russell Wilson to just name a few. All these quarterbacks started from day one and have Super Bowl appearances, while Wilson has a victory.

Cam Newton came into a situation where he was needed to start because the Panthers were using quarterbacks such as Jimmy Clausen and Matt Moore.

Matt Ryan also had to move the Atlanta Falcons past the Michael Vick era because when Vick went to prison, the Falcons were forced to play Joey Harrington and a washed-up Byron Leftwich.

Russell Wilson earned his stripes early. Being a third-round pick in 2012, he was thrown into a quarterback battle against Matt Flynn and Tarvaris Jackson. Of course, Wilson won that, and two years later he was a Super Bowl Champion.

You could also throw in Carson Wentz’s name. Wentz started day one in his rookie season, and in only his second season, Wentz looked destined to win MVP honors and take the Philadelphia Eagles to the Super Bowl only for his campaigned to be shortened to 13 games after he suffered a torn ACL.

I would say there is not a definitive answer for if quarterbacks should sit their first season. Everyone’s situation varies. If there is a guy ahead of the rookie who is capable, then keep him there until the wheels fall off. Secondly, if you have no other reliable options at the position, prepare the young guy in training camp and the preseason and throw him to the wolves come week one.

Hello, pop addicts of Valdosta State, and welcome back to another edition of Pop Addict. ...