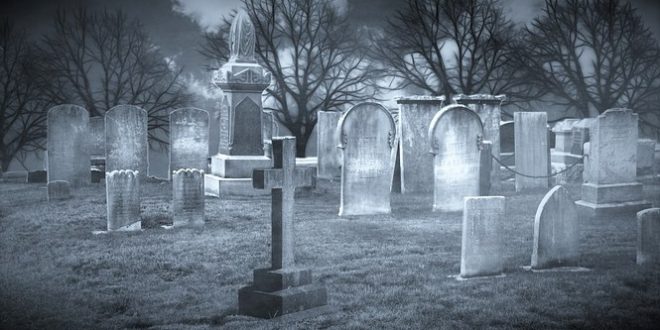 The time of Halloween is upon us, and that means it is time for spooky things such as witches, ghosts, and cemeteries. However, the question arises of why a place meant to honor the deceased have become somewhere “creepy”. This misconception came rather recently.

Despite what we learn when we are younger, cemeteries usually aren’t hidden away but rather in busy, residential areas. Death is marked differently in different cultures, but every culture seems to respect the dead. Since respecting those who have passed has been taught to us forever, cemeteries are usually in communities. This proximity may have led to many of the urban legends we associate with cemeteries.

One factor that has affected how we view death is the fact that life expectancy and quality of life have improved over the years. We seem have come to view cemeteries as creepy or scary, creating tall tales in our heads.

This take on cemeteries often plays out in pop culture. When many people think of burials, they may imagine foggy moonlight moors, boogeymen lurking in the shadows, and other macabre clichés. Our imagination tends to run wild when it comes to what happens after death.

What makes cemeteries so creepy though? Is it the thought of all those decaying bodies under the dirt or the idea of a bony arm emerging from the soil to grab your ankle and pull you into the underworld ? Is it something deeper?

Like it or not, we’re all going to die. You may think you’ve accepted that fact, but it’s an issue humanity has struggled with for millennia. Unable to avoid it, we’ve tried to figure out what lies beyond its doors. Will we live forever in a golden paradise, be reincarnated or simply cease to exist?

Biologically, fear exists as a response to stimuli that threatens our survival as a species. We’re programmed to fight or run from anything that might cause death, and we approach death itself with the same attitude. We flee from it every day by distancing it from our thoughts and lives. In many parts of the world, we’ve handed the duties of interring the dead over to mortuary professionals, which limits our intimacy with death.

We’re a species that instinctively fears death, yet we work hard to maintain spaces where the dead are memorialized and at least partially preserved. On top of that, we have religions full of resurrection prophecies and thousands of years’ worth of superstitions, folktales and ghost stories. Maybe you avoid cemeteries or actively try to speak to the dead through TV psychic mediums. Either way, you’re striving to avoid the real relationship that exists between life and death.

We’ve poured a lot of superstition and fear into our graveyards, which makes for quite a powerful atmosphere. Not only do graveyards play on past memories of loss, they also invoke potential themes of supernatural terror. It’s not just horror movies that contribute to this frightening reputation. Cemetery preservation groups and historical societies sometimes get in on the action with haunted tours.

In more extreme cases, people actually suffer from coimetrophobia, the fear of graveyards. The condition involves a heightened, unrealistic fear of graveyards that actively interferes with a person’s life. Unless walking past a cemetery makes your heart race or the words “graveyard shift” make you faint, your fear probably doesn’t qualify as a phobia.

For the most part, the only things you really have to fear in graveyards are collapsing tombstones and monuments. Besides that, living, breathing humans are responsible for more graveyard assaults than all the vampires, zombies and ghouls combined.

However, creating these fantasies about cemeteries undermines their significance as ritual burial places. Cemeteries are a place where those no longer with us are laid to rest, but they also provide solace to the living. We can remember our loved ones by visiting their graves and somewhat keep them with us.

The end of life has significance to everyone, regardless of culture. If you have ever planned a funeral for a loved one, or pre-planned your own funeral, you quickly realize that fear has very little to do with cemeteries and funerals. It is simply about respecting the deceased.

As a lover of Halloween, I love spooky movies and ideas, but cemeteries should not be deemed solely as a scary thing. I believe we as students should respect them for what they are.