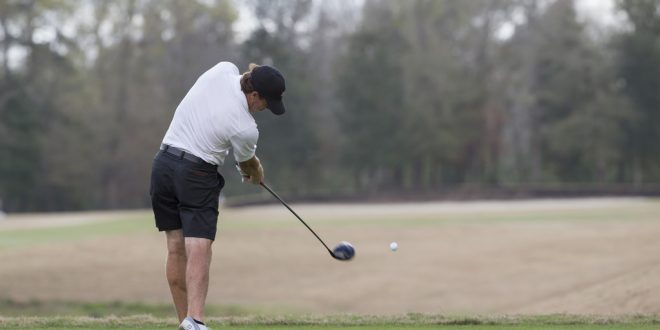 The Blazers will now turn their attention to the Blazer Cup.

At the Copperhead Course at Innisbrook Golf Resort, No. 1 Barry University continued its pattern of dominance, winning its third tournament in as many appearances, this time by 24 shots over host West Florida.

VSU showed us some of what had its supporters excited at the start of the season, but its 13th place finish also made known that the team still has work to do.

While the Blazers didn’t get the total output they desired, their top three players came to play, with Senior Matt Anderson leading the way once again.  Except, on this occasion, he was accompanied by Freshman Gage Smith at two over par for the tournament.

Smith turned in VSU’s lowest score of round one, posting an even par 71, during which he came out of the gate at two under before making the turn (he started on 11).  He went on to score a 37 on the other side and despite two bogeys on nine and 10 to end his round, responded well to start the next 18.

However, he did go double bogey-bogey on those holes in round two to end a second-round 74.

Smith noted that it wasn’t a product of not being able to finish mentally, but had more to do with the holes themselves.

“I don’t think it had anything to do with the fact that I was finishing bad,” Smith said.  “I never played bad golf. There was just a few tee shots (6,9,10) that didn’t suit my eye. I accepted that I played those holes poorly, but I also played 15 holes of golf really well, so I tried to mainly focus on that.”

With that being said, there was a lot of good that fans can shift their attention to.

Beginning on hole 10 on Tuesday, Smith played his first 15 holes of the final round at two under par, with pars on 13 of them and birdies on 14 and 4 sprinkled in.

“I really played that stretch solid all week,” Smith said. “I think I only made one bogey on 11-5 all week. My ball striking was good this week, and that’s imperative on every hole out here.”

Anderson, who was also tied for 15th at two over par for the week, posted two separate 73s on Monday.  In the final round, Anderson’s two under 69 was just one shot off the field’s low score of the day.

Anderson was “very happy” with how he ended the tournament and said that the difference in round three was how he performed on the greens.

“The difference maker for me today was solely putting,” Anderson said.  “I putted poorly during the first day and spent a few minutes on the practice green with Coach after the round, and we figured something out.  I was finally able to make the birdie putts when I put myself in position.”

Included in that performance were three consecutive birdies on holes 15-17, and he nearly pulled off another on “The Copperhead,” the course’s famous finishing hole.

“I hit the shots exactly where I wanted to and made the putts,” Anderson said in reference to those birdies.

According to Anderson, how he fared on 15 and “The Snake Pit” that followed “was just textbook solid golf.”

Another man’s performance that could be described as solid was that of Freshman Brock Healy, who posted two rounds of 73 with a 71 sandwiched in-between.

What distanced the team from contention was the distance between the team’s top three and the remaining participants.

Freshman Davis Smith, who has played in both of the previous events for VSU, got off to a tough start on Monday morning, going bogey-bogey-triple-bogey in his first four holes.  He did, however, finish the first round on a high note, with birdies on nine and 10, his last two holes.

In total, he shot an opening round 81, and his second round was three shots worth of improvement.

On Tuesday, the young gun played the treacherous back side, his first side, at two over 37 with birdies on 11 and 14.  For the 54-hole tournament, he finished in 82nd at 24 over par.

Mainstay Jordan Long was not in the lineup for this event.

Filling that spot was Junior Thomas Jespersen, a native of Denmark, who earned his playing time through his performance in qualifying.

“It felt really good to qualify for the starting five,” Jespersen said. “I have been playing a lot better lately and was starting to see some better scores in qualifying.”

Jespersen, making his season debut and his first appearance since February, did not play as well as he had hoped.  He went 81-79-82 in this Copperhead Championship to finish in 86th place.

No. 7 West Florida came in second place behind Barry, at six over par as a team. Their top player, Christian Bosso, won the event as an individual, his first career victory, with a 10 under total that included a six under 65 in round one.

Barry’s Tyler Bakich, who was one off the lead of his teammate Conor Richards after the first two rounds, turned in a one under 70 to finish two shots shy of Bosso.

Before taking the trip down to Rio Grande, Puerto Rico, for their next event, VSU will take a break from the grind.  This weekend, they’ll participate in the Blazer Cup, an annual fundraising event that brings together players from the present and legends from the past.

“We are all looking forward to the Blazer Cup,” Anderson said.  “I look forward to it every year.  It’s really fun to be able to play golf with people you love being around when the score doesn’t matter.  We don’t get many opportunities to play worry free golf during the year.”