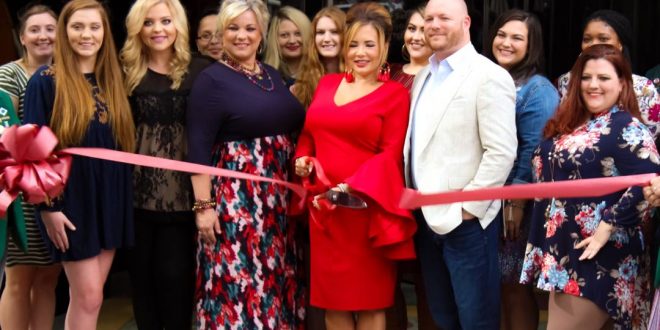 Deidre Thompson, Perfectly Priscilla's CEO and main fashion designer, stands alongside her husband, Tommy Thompson, and many of the store's supporters as she opens the company's first major physical location.

Downtown Valdosta received another addition to its chic plaza on Oct. 8 with the grand opening of Perfectly Priscilla, a “curvy girl” clothing boutique.

Originally operating out of a warehouse and selling online, Perfectly Priscilla’s Valdosta location would be the company’s first major physical location.

Deidre Thompson, CEO and main fashion designer, said she’s excited about their new location. She said she chose downtown Valdosta because of its overall vibe.

“I love the look and feel of downtown,” Thompson said. “We also feel that we pull from all over the United States, especially off of I-75. We can bring a lot of traffic to downtown.”

The boutique was born out of the rage Thompson felt after being unable to find a desirable outfit in plus sizes for her tenth wedding anniversary. It was then that she realized there weren’t any stores carrying fashionable clothes for curvy girls.

Hoping to cultivate inclusiveness and give the plus-sized community more than just “select styles”, she opened Perfectly Priscilla.

“I’ve always loved fashion and I decided that there needs to be a boutique dedicated to the sizes 10-26,” she said. “We are the first and only curvy girl boutique in the nation to come out.”

The boutique began online under perfectlypriscilla.com in 2014 and operated out of the foyer of Thompson’s home. A year later it expanded into a warehouse but has grown into one of the biggest curvy boutiques in the nation, especially online.

“No one felt like there was really a market for curvy girl clothing, but we proved them wrong,” she said.

Thompson does not intend to stop growing here however. She’s already keeping a few goals in mind so that her store can continue to be successful.

“We hope to continue to expand our online presence and also open two to three more stores in major metropolitan areas throughout the year from now going forward,” she said, “We have plans to open in places like Macon, Atlanta, Savannah, and even Texas.”

Perfectly Priscilla is located on 116 N Patterson St, Valdosta, GA 31601 and is open Tuesday through Saturday 10 a.m. to 6 p.m. On Mondays and Sundays the store is closed.