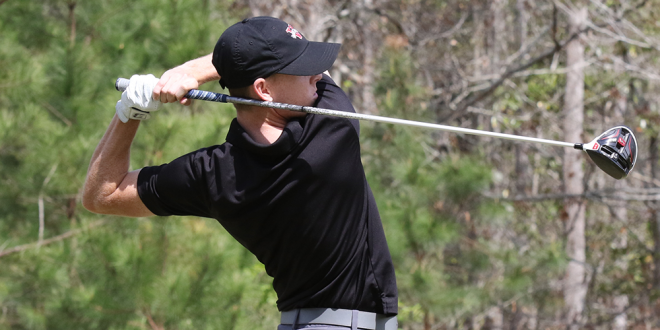 Coach Jared Purvis and Blazer Golf will return to Rio Grande, Puerto Rico this week for the first time since their win there two years ago, looking not only to defend their title, but also to end their fall season on a high note.

The River Course, a 6,945-yard par 72 designed by Golf great Greg Norman, is one of two courses located at the Rio Mar Golf Club at the Wyndham Rio Mar Beach Resort. It features views of the El Yunque National Rainforest’s mountains, the Atlantic Ocean, and the Mameyes River that divides the course east and west.

This venue offers not only a nice vacation trip for the players, but also an opportunity to win with a strong showing.

“PR is always a fun trip,” Junior Jordan Long said. “Two years ago we all had a good time and played some good golf. If we do that, I think we have a good chance to defend.”

The course itself is mostly straight forward, “a relatively generous course that punishes players for errant shots,” according to former Blazer and 2018 All-GSC performer Davis Roche.

Long and Roche, who both played in this University of Illinois-Springfield (UIS) Island Getaway in 2016, as well as Purvis all agree on what the recipe for success is at Rio Mar.

“The key is ball striking and hitting as many greens as possible,” Purvis said. “The greens are typically quite slow and difficult to make a lot of long putts, so it’s key to hit greens where you can make a lot of two-putt pars.”

Hole three is a 192-yard par 3 that requires the players to carry over water. The 14th, which features a marsh between the tee box and the green, measures 174 yards.

The lineup for Purvis will be the same as it was for the Blazers’ first two events, with Matt Anderson, Brock Healy, Jordan Long, Davis Smith, and Gage Smith in the top five (listed alphabetically, not by place in the lineup).

However, in an unusual occurrence, in addition to the regular lineup, the remaining five Blazers will be added to the event’s field in the form of a B-team.

Regarding the other five, it will be an opportunity for them to gain experience, and Purvis said that he “will find out a lot” about them as they perform in a tournament environment, all but one of them for the first time this year.

Two of the headliners in that extra lineup will be Parker Rowe and Ben Trancygier, local products who both look forward to making this trip and participating in this event.

Rowe, who redshirted last season, will be making his college tournament debut.

“I have been very eager to tee it up for the Blazers since I first came here,” Rowe said. “There will be some first-tee nerves, but I have confidence in my game.”

Trancygier, who hails from Hahira, earned All-Region honors twice while playing for the Valwood Valiants. He’ll be making his first appearance since last season.

Wesley Hanson will also be making his first appearance of the fall season. Last year, the sophomore out of Macon, Georgia, was named the Gulf South Conference Freshman of the Year after putting up strong performances in the Matlock Collegiate Classic and in the Saint Leo Invitational.

Freshman Chase “Stormy” Weathers came from St. Mary’s, Georgia, and his home course was The Club at Osprey Cove, designed by PGA Tour pro Mark McCumber. He will be playing in his first tournament as a Blazer.

Not a newcomer, but also in this B-team lineup will be Junior Thomas Jespersen, who made an appearance in the starting five for the Blazers’ last tournament at Copperhead.

With the Blazers looking to get back on track following their last two finishes, it will be important for the team to avoid the potential distractions that could come with a trip like this.

“This trip will be treated like any other tournament we attend,” Purvis said. “When it’s time to practice and play, we will. The guys will have time to sight see and relax a little, but we are still there to win a tournament.”

Previous Two for two: Stacey Abrams returns to VSU
Next Column: Who will be the next great NBA star?