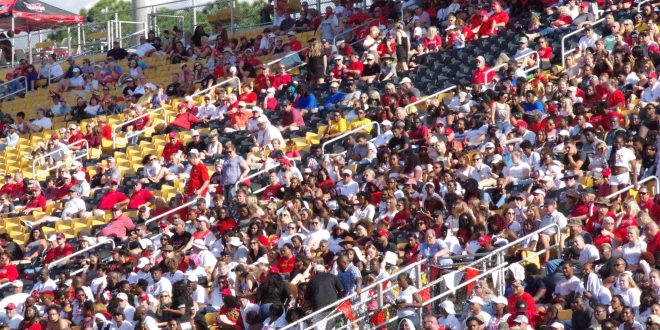 The Blazers sit at an unblemished 9-0 record, yet their fans are not supporting the hype.

The VSU student body has finally gotten behind the Blazers football team this season.  It only took 70 days, nine games, and an undefeated record for students to generate excitement for their fellow Blazers.

Since coming to VSU in 2016, I have always observed a flaw: The student support and attendance have been low on Saturday nights.

No one is packing the stadium. In the front row of the student section, you see the Fire Pit and a handful of silent students sitting behind them.

It seems that the alums have more school spirit than the current students at the Blazer games.

Now, since the Blazers have rumbled to an undefeated 9-0 record, I see my peers trash talking West Georgia students and players through social media. But my question is, “Why now?”

Why did it take nine games for students to come out to show that they are proud to be a Blazer? Is it because it’s a rival game to determine who takes home the Peach Basket, the GSC Championship, and bragging rights? It just seems artificial to me.

Senior Middle Grades Education major Jordan Bryant expressed his frustration with the lack of student attendance at the games.

“The attendance is very spotty and inconsistent,” Bryant said. “Now because the hype is on us and we’re going to have a national platform, everyone wants to show out. It’s kind of fair-weather.”

If you were at the homecoming game against North Greenville, you saw the students clear out of the stands after the king and queen were crowned. That raises a red flag regarding the student’s agenda.

I understand that they came out to support their friends or who they campaigned for. But why couldn’t the purpose be to support your friend along with your school’s football team who are out for blood this season?

Saturday will be the proving ground for the Blazers along with the students as the only reason behind coming to this game is to watch a good football game and interact with your classmates.

Fire Pit member Joshua Hall felt that students have taken the Blazers for granted since they are not a Division I program.

This is your home for four years. Your parents are spending their money for you to get an education and have a good time.

Yes, you may think you are not losing anything since the games are free for students, but the fee for those games are integrated somewhere in your tuition.

Why not come out? What’s stopping you? Why can Valdosta High School pack out Bazemore-Hyder Stadium every Friday night but we cannot do the same on Saturday nights?

I’m calling for all students to show up and show out in support of your Blazers on Saturday. Keep the same energy that you’ve exerted on social media and bring it to the game. The Blazers could be making a championship run right before your eyes.

Wouldn’t you want to say that your school won a championship while you were there? I know I do.

Support could be vital throughout the postseason as your VaLLLLLLLLLdosta Blazers are focused on bringing the ring back to Titletown!