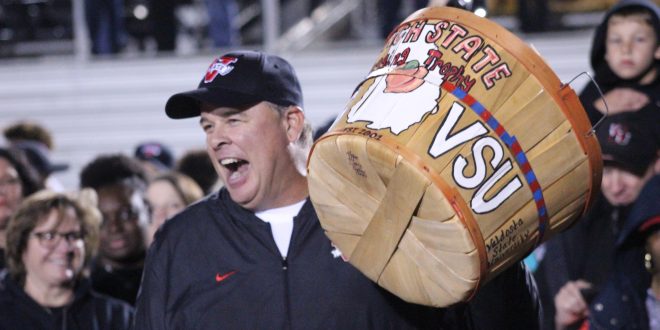 The Blazers finish the regular season undefeated for the first time in program history.

On Saturday, Nov. 10, Valdosta State saw a rise in attendance at the VSU versus West Georgia game with over ten thousand fans and winning the Peach Basket was just the cherry on top.

“It means a lot with this being the conference championship, bringing the peach basket back and being the only undefeated team in the conference,” Kenny Benjamin said. “It really does mean a lot, but we just have to move forward now and not get complacent.”

Quarterback Rogan Wells rushed for a game-high 143 yards and Jamar Thompkins added 122 yards rushing as the Blazers’ run game amassed 395 yards in a 47-31 win against the West Georgia Wolves on Saturday night at Bazemore-Hyder Stadium.

The Blazers won the Gulf South Conference Championship for the seventh time and the Battle for the Peach Basket for bragging rights in the state of Georgia. The win came by way of some notable playmaking from the receivers and offensive line.

“Without the offensive line, we wouldn’t be able to throw the ball to the receivers for these touchdowns,” Wells said. “Everyone made plays all night, so the credit goes all around.”

Wells’ mobility was on full display in the matchup as he ran for a 55-yard touchdown early in the fourth quarter to put the Blazers up 44-31. His arm was lethal as well, surpassing the 100-yard passing mark before halftime.

He finished the game with 164 passing yards and a lone touchdown pass to Wide Reciever Lio’undre Gallimore. The 29-yard score extended VSU’s lead to 27-14 with less than two minutes to play in the first half.

The Wolves were not fully tamed, yet. UWG Quarterback Willie Candler connected with Malik Henry on a 5-yard TD pass with eight seconds remaining until halftime to cut the deficit to 27-21.

There was still enough time for the No. 1 scoring offense in the nation to put the ball in the endzone for one more score. Then, the magic happened.

With 1.4 seconds left before the band took the field, Freshman Quarterback Ivory Durham eluded pressure from a destroyed pocket and ran behind his many blockers ahead of him for a 53-yard touchdown.

Durham’s run sent shockwaves through stadium extending the Blazers’ lead to 34-21. The Jacksonville, Florida native previously tossed a 25-yard strike off a decoy play to Benjamin at the seven-minute mark of the second quarter.

Although Durham came off the freezing bench, his flesh was hot with preparation.

“My coach told me to ‘stay ready,’” Durham said. “He called my number, I went in and executed exactly what I was supposed to do.”

Between the Blazers and Wolves, the record stands at 25-13 all-time with VSU having total advantage. The only difference with this game was discipline.

The Black Swarm defense suffocated the Wolves to a touchdown and a field goal in the second half. Raynell Killian led the team with seven tackles, including five solo stops.

Stephen Denmark had six tackles with four solo stops and two for losses. Ravarius Rivers and Taurus Dotson finished with five tackles each.

Coming into the matchup, the Blazers were aware of the intensity that was needed on both sides of the ball. Benjamin praised the members of the defense for sticking through the trash talk and mental game from the Wolves.

“It was dog versus dog,” Benjamin said. “We knew all week that this was going to be a nitty gritty game, so we just had to keep our heads, ball out, and know that it was going to be a dog fight. Our defense did that.”

The Blazers have secured the GSC and are playoff bound as a top seed, but their philosophy of collecting victories doesn’t seem to be changing any time soon.

“We are going to keep executing like we have been doing all year, game by game,” Durham said. “We will continue competing in practice and be ready for whoever we have next.”

Previous Column: Is West Georgia’s success flawed?
Next The Blaze at Baze’