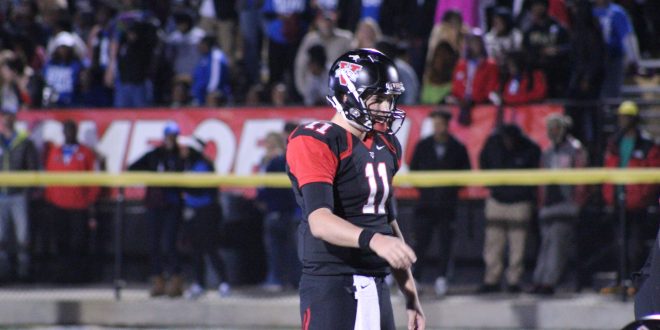 The Blazers will play the winner of the No. 4 Bowie State/No. 5 West Alabama.

In the wake of their dominating 47-31 victory against No. 3 West Georgia on Saturday night, the No. 3 Valdosta State Blazers football team learned their fate going forward.

The Blazers will be the top seed in NCAA Super Region 2 and will receive a first-round bye in the upcoming NCAA Division II Football Championship, the selection show announced Sunday.

VSU, who registered their first undefeated regular season at 10-0 since 2002, earned their first Gulf South Conference title since 2010 and will make their 15th appearance in the NCAA postseason.

The Blazers have been named GSC champions seven times in program history.

“This whole season has been a grind, so thankfully we came out undefeated,” Quaterback Rogan Wells said. “This is part two now, so we will go into this bye week, recover, and see who we play this following Saturday.”

VSU will play the winner of the No. 4/5 matchup between Bowie State and West Alabama as that game will be played Saturday. The Blazers defeated West Alabama 58-24 on Sept 15.

No. 2/7 matchup between West Georgia and Wingate will be played on Saturday as well. No. 3/6 matchup of Lenoir-Rhyne and Florida Tech will follow.

The Blazers will host the second-round game, Saturday Nov. 24 at 1 p.m. at Bazemore-Hyder Stadium. VSU last hosted a playoff game in 2016 with a 24-21 loss to UNC-Pembroke in the first round.

If the Blazers secure a victory on Nov. 24, they also would host the regional final on Saturday Dec. 1 at Bazemore-Hyder Stadium.

The national semifinals are scheduled for Saturday Dec. 8 at sites to be announced based on reseeding of the remaining four teams and the national championship game will be held at McKinney ISD Stadium in McKinney, Texas on Saturday Dec. 15.

Previous VSU changes interview process for new deans
Next Turn It Off: 5 TV Episodes That Killed Their Show