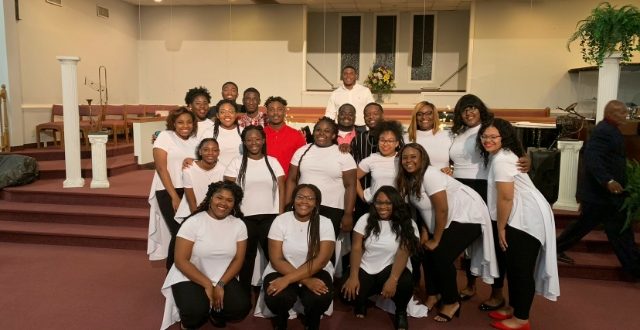 VSU’s Mass Choir is singing all the way to the bank as it earned a $1000 prize in the Warren Jemarcus Williams Scholarship Fundraiser in Lilburn, GA.

Performing “Hope” by Dexter Walker and Zion Movement, Mass Choir managed to beat out Georgia State University’s own team for the prize. According to Aria Dinkens, junior alto, it was the group’s positive spirits that really won the competition.

“The entire program was just lovely,” Dinkens said. “We had an excellent singer, a 14-year-old young man with a record deal, blew us away. Then we performed our piece. It was about 10 minutes long, and we did well.”

The choir was entered in the competition this past August by its Director, Carlton Freeman.

According to the members, Freeman entered them to show off their skills, but he found the bonding experience and the cause to be the most important part of the fundraiser.

“Mr. Freeman mostly wanted it to be about praise and thanks,” Dinkens said. “He did want us to compete, but it was mostly to help the parents honor the memory of their son. He is the reason for the scholarship in the first place.”

He was just starting his freshman year at Gainesville College in Athens, Georgia when he suffered heart failure during a basketball game on March 31, 2006.

Williams turned out to have an undetected heart disease called hypertrophic cardiomyopathy. It caused his death later that night.

In his honor, his parents started the scholarship foundation, making way for VSU’s Mass Choir to reach out and compete.

“It was a great and amazing experience,” Dinkens said. “As a matter of fact, we were really excited when Mr. Freeman told us we were entered, especially for the scholarship fundraiser.”

Dinkens said she and Mass Choir were excited all throughout the competition. They weren’t the only ones either.

“I am not sure about our future plans, but we do have the fall and spring Concerts, and we are always looking for new members,” Dinkens said. “I can’t wait to see what happens.”