Home / Sports / Blazers look to down Bears in quarterfinals 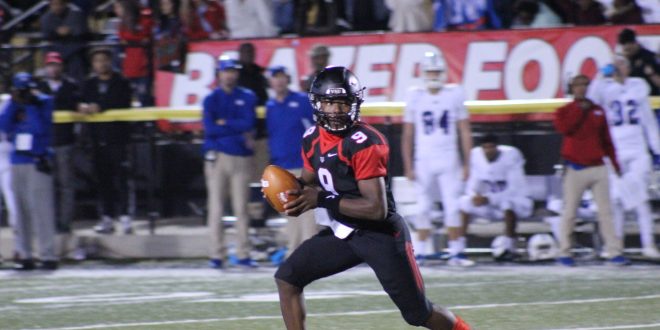 Both VSU and Lenoir-Rhyne are atop of their respective conferences in scoring.

Blazers look to down Bears in quarterfinals

After obliterating Amir Hall and the Bowie State Bulldogs, the Blazers are ready to face the next opponent who stands in the way of their championship hopes in the Lenoir-Rhyne Bears.

The Blazers are averaging 53.5 points per game and rely on a balanced yet big play-oriented offense.

Gulf South Conference Offensive Player of the Year Rogan Wells is the spearhead of the Blazers’ potent offensive attack. Wells has scored 40 total touchdowns and has only been picked off four times.

In Wells’ backfield, he has a two-headed monster in the furor freshmen in Jamar Thompkins and Seth McGill. Behind the No. 1 Offensive Lineman in the Nation, Jeremy King, the duo combined for 1,616 rushing yards along with 13 touchdowns.

If those two get going, it could cause the Bears to shift their attention to them and would allow Wells to take the top off the defense, distributing the ball to his array of receiver options.

Lio’undre Gallimore, Brian Saunds and Kenny Benjamin    all are threats make to play. The trio combines for 1,060 receiving yards and 21 touchdowns. The three speed demons could utilize their finesse and elusiveness to leave opposing defensive backs in the dust.

Lenoir Rhyne has posted an average of 42.54 points per game, leading the South Atlantic Conference.

With so many reliable options in the backfield, the main attack of the Bears offensive game is their rushing attack.

Posting 280.1 rushing yards per game, the Bear’s aerial attack is an afterthought as Blazers will try to the keep their wide range of running backs in check.

Their Quarterback, Grayson Willingham, averages 194 passing yards a game with 24 touchdowns and nine interceptions, but he is not the focal point of the offensive game plan.

With the Bears having so many weapons at running back, none of them are bound to go for a big game, but could be dangerous if the Blazer defense can’t get a grasp of them.

The Blazers defense will be stiff against the competition. Though they may bend at times, they are an interception or a forced fumble away from shifting the momentum.

The rigid frontline of GSC Defensive Second Teamers, Iseoluwapo Jegede and Joe Mozone, who have combined for 10 tackles for loss this season will look to force a discomforting pressure on Willingham along with his multiple backs.

The linebackers are led by GSC Freshman Defensive Player of the Year Jameon Gaskin. Gaskin has 59 tackles and four sacks on the season.

The No Fly Zone and Second Team All GSC Defense members, Ravarius Rivers and Stephen Denmark will be looking to bait Willingham into passes only to come away with an interception or a break up.

Led by Linebacker Sherrod Williams, the Bear’s stingy defense allows 20.3 points per game along with 343.7 yards allowed per game.

Safety Eric Jackson is a walking pick. Jackson has intercepted the quarterback six times this season.

This quarterfinals matchup will be determined on defense.

The Blazers won’t have to worry about a big passing night, but they will definitely have to take away Lenoir-Rhyne’s rushing game to force them to throw the ball.

As for the Bears, they know what the Blazers are capable of. Their defense must come with their A-game on both aspects of the defense to keep the Blazers from breaking big plays or it will be a long afternoon for them.

Kick-off will be Saturday at 1 p.m. at Bazemore-Hyder Stadium.

Previous ‘We can score in bunches’: VSU playing beyond the arc
Next D2 and Bruther: Boys, Blazers, Roommates