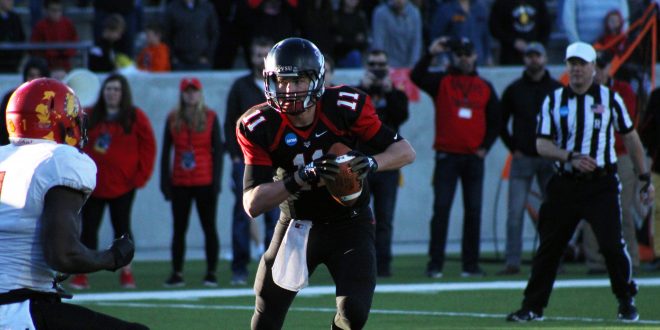 Rogan Wells was responsible for six of VSU's touchdowns in the national championship victory over Ferris State 49-47. This came a day after Wells was edged by Jayru Campbell for the Harlon Hill trophy.

In just his third year as head coach of Valdosta State Football, Kerwin Bell has provided the program’s fourth championship and first undefeated season ever after defeating Ferris State 49-47 in McKinney, Texas on Saturday.

The contest broke many records and went wire-to-wire with a champion not being decided until the final minute of the game.

Of the records broken, Rogan Wells became the record holder for the player responsible for the most touchdowns in a championship game with six and tied the record for most passing touchdowns with five.

It was a true championship game as there were nine lead changes and seven straight scores from the Blazers after Andrew Gray missed a field goal on the opening drive of the game. The game was a see-saw, back-and-fourth affair until the Black Swarm defense made a crucial play on Harlon Hill winner, Jayru Campbell.

After two consecutive stops forced the Bulldogs into a third-and-long situation Alex Brown intercepted Campbell and had a 31-yard return to set up the Blazers to take a two score advantage late in the third quarter.

The Bulldogs still had fight and pulled back within striking distance but that’s when Bell pulled out his trump card.

Clinging to a four point advantage in the final period, back-up quarterback Ivory Durham came into the game slotted at receiver. He went in motion and received a handoff from Wells who moved to the left of the field. Immediately picked up by a Bulldogs defender he sprinted towards the end zone.

Durham threw a pass across his body placing it where only Wells could snag it. Wells trotted into the end zone to give the Blazers an 11-point lead.

“We knew that if we had to be better than 5-4 that we needed to work hard in the weight room and on the field and we did that,” Wells said. “Like every day, in the winter, in the spring, and especially in the summer. We had about 50 people down in Valdosta in the summer so, we were working really hard and it pays off.”

That hard work pushed the Blazers to one of the top teams in the nation but they were still facing elite competition in the Bulldogs. Ferris showed resilience, not allowing the Blazers to score again while cutting into the Blazers lead with a field goal and touchdown making it a two-point contest.

With under a minute remaining in the game the Black Swarm needed one more stop.

The Bulldogs pulled out the famed “Philly special” similar to the play the Blazers had scored on earlier in the quarter. The only difference was how prepared the Blazers defense was for the trickery. Campbell who was the target on the play was immediately picked up and not allowed to roam free.

The result of the play was an incomplete pass and the Blazers recovered the ensuing onside kick. After a few snaps in victory formation the celebration was on. The Blazers were crowned national champions once again.

“Rogan was special at quarterback tonight,” Bell said after the game. “I told our defense when we started the playoffs that we got a lot of publicity from our offense but we were only going to win a championship if we played championship-style defense. And our defense made the stop to win us a championship. You have to give those guys a lot of credit. It was a great team win.”

Campbell won the Harlon Hill trophy on Friday beating out Wells 202-126 in votes to be named the most outstanding player in Division II football.  Wells and the Blazers got the more coveted of the two trophies and the title of best team in the nation in the process.

The title makes Blazer’s football fourth this century and it is the third time that they’ve won a championship on Dec. 15. Football joins the Red Hots and Cheerleading as the two other national champion winners in 2018.

Winning the championship caps off an undefeated season for the Blazers for the first time in the 36 years of program history and ends a season that will be shared for years to come.

Previous Flying under the radar: Black Swarm has one more test
Next Notebook: Blazers top performances of championship run