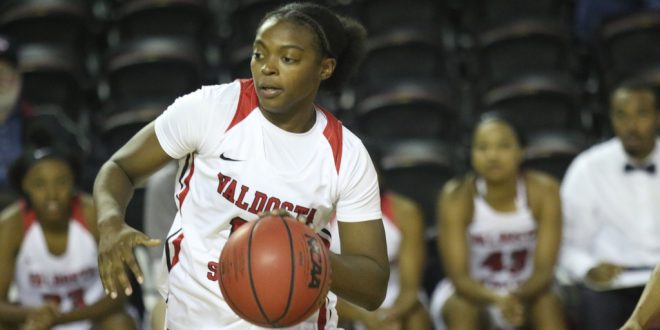 Sonya Franklin and Crystal Townsend each led the Lady Blazers with 15 points.

Despite Shorter’s Jamilla Harrison and Jasmine Gaines each scoring twenty points, the Lady Blazers still held on for a 72-65 win.

Sonya Franklin and Crystal Townsend each led the Lady Blazers with 15 points.

The game opened with the Lady Blazers facing mild struggles, shooting 38 percent from the field.

The next quarter, they raised their percentage to 44 percent for the half, after knocking down 50 percent of their shots.

The Lady Blazers entered the half with the 31-25 lead.

Franklin led the pack, pouring in nine points in the first half on 4-7 shooting.

Corazza knocked down two consecutive three-pointers from beyond the arc for Lady Blazers in the third quarter, helping them open a 49-41 lead.

The Lady Hawks tried to pull themselves in the game by feeding their hot hands, Harrison and Gaines. But the depth of the Lady Blazers was too much, as they had four players in double figures: Franklin, Townsend, Corazza and Kayla Bonilla.

Head coach Carley Kuhns felt the game was evenly matched as far as defense, but the Lady Blazers’ good shot selection, led by Franklin and Townsend, made the difference.

“Sonya and Crystal just took over. They stepped up and made plays all game and finished at the rim,” Kuhns said.

But she also said that her team needs to play better basketball down the stretch heading into the conference and the national tournaments.

“We want to be playing our best basketball in February and March, and we’re inching towards that and not taking any steps back.”

Franklin thought that this win was an ugly one but is gracious to get back in the win column.

“It was rough. We tried to stay composed and keep our heads together,” she said.

Her advanced driving skills played a key role in the equation.

“Getting to the rim was pretty easy, and that’s where we looked to go,” Franklin said.

Townsend discussed how her team allowed her to take a more aggressive approach and what her mindset is headed into the remainder of the season.

“My team trusted me to take shots, and I had the room and momentum to do so,” Townsend said. “My mindset is always the same. Winning. I want a championship.”

The Lady Blazers will be on the road in their next game when they face Montevallo on Jan. 24.

Previous Intensity could get the Blazers back on track
Next Jones kindles the Blazers off the bench, flames Hawks