Home / Sports / Preview: VSU goes on the road to Montevallo 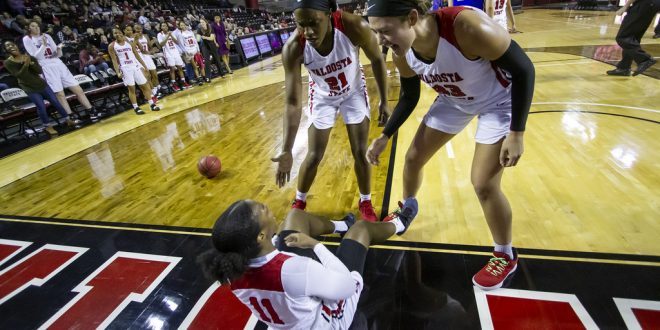 This will be the first meeting for both VSU teams this season versus Montevallo.

Preview: VSU goes on the road to Montevallo

Women’s: The Lady Blazers will attempt to continue their success against Montevallo’s Lady Falcons on Thursday Jan 24.

Thursday’s game will determine who will take the No. 4 spot in the Gulf South Conference.

The Lady Blazers are coming off a 72-65 win against the Lady Hawks of Shorter University.

VSU’s Kayla Bonilla and Crystal Townsend each leads the Lady Blazers with 11.2 points per game. Their defense is their Achilles heel.

The Lady Blazers force 18 turnovers per game and allow their opponents to shoot 39 percent from the field and 28 percent from deep.

The Lady Falcons show that they can score with their counterparts, as they have a 1.2 point margin for the season.

What could haunt them is turnovers. The Lady Falcons average 18 a game and could possibly play into the hand of the Lady Blazers.

The Lady Falcons must lean on Nautika Philpot for their scoring if they expect to compete. She comes into Thursday’s game averaging 13.9 points and 3.6 assists per game. To put her team in the best position to win, she must shake her shooting woes from their previous game against Auburn University at Montgomery, where she went 3-11 from the field in the win.

This GSC showdown will tip-off at 5:30 p.m. at the Trustmark Arena.

Men’s: It took an additional 15 minutes to declare a winner in the first Montevallo matchup a season ago.

With the Blazers prevailing in three overtimes, they gained a newfound respect for the Falcons, who were 6-6 compared to their 8-2 record.

The teams met one more time with the Blazers inching the Falcons 68-67 on the road.

On Thursday, they will face off again in a Gulf South Conference matchup.

The Falcons, who are 8-11, are coming off a 63-47 win against the Auburn at Montgomery Warhawks. Their scoring has been scarce as their leading scorer, Micah Fuller, only averages 11.2 points per game.

Jamaar Taylor and Chris Williams, the Falcons’ top two scorers last season, have both since left the team, leaving players without their usual big scoring loads.

The Falcons must put their best foot forward defensively if they expect to halt the Blazers’ streaky shooting since their offense doesn’t have nearly the firepower to compete.

They’ll be looking to build from their 93-82 win against Shorter University on Saturday.

Leading scorer Beau Justice has been struggling with his shot over the last four games, shooting 26 percent from three. Justice is due for a big game as he will look to break his shooting slump and get back to his normal, dazzling three-point shot.

The Blazers will look to trend upward as they sit at No. 2 in the GSC, and Montevallo rests at ninth.