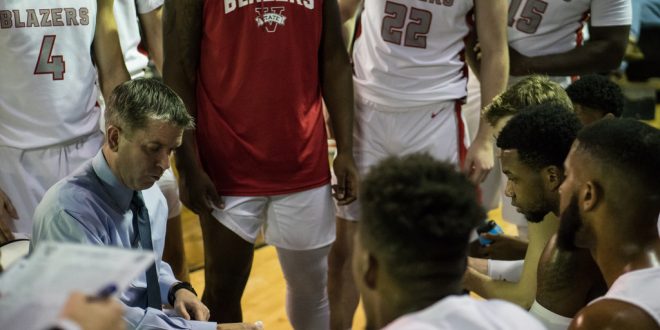 The Blazers are ranked third in the Gulf South Conference standings.

Rival teams should keep their targets.

The Blazers have the track record and are not fazed by teams who hate them most.

At 14-4 and second in the Gulf South Conference standings, VSU doesn’t seem to be changing things up – at least not now.

“We try to prepare for each game the same way and take care of ourselves first,” Helfer said. “Obviously we will always tweak our system toward our opponent to try to maximize our strengths.”

One of the Blazers’ biggest rivals, West Georgia, gave them a lot of problems on Jan. 17, losing 87-86. Facing rivals bring out a different type of play.

“When you play your rival, you can’t just say ‘it’s another game,’” Helfer said. “Obviously it’s not, so approach it with the mindset that it’s going to be high energy and high intensity 40 minutes of basketball. You need to play your very best in this game to give yourself a chance to win and stay focused on doing your job.”

Going into the matchup, the team was very much aware of Marquill Smith’s stats and average score lead at 24.5 in the GSC and the need for each player to try his best to neutralize Smith’s scoring.

As great of a scoring night he had, with 32 points to be exact, he couldn’t be stopped. Helfer understands that great players are going to get their points nine times out of 10.

“Sometimes it’s about slowing a great scorer down instead of stopping him,” Helfer said.

Helfer remains confident in his team.

“It’s always a big game in basketball when you’re playing your rival, so you are going to have trouble no matter what happens,” Helfer said. “We just have to make sure we get ready for our next game and are ready to play.”

With this confidence in place, the Blazers plan to finish the remaining games of the season with strong effort.

Previous Blazers will start season at No. 5
Next Column: Blazers’ success married to Beau’s endurance