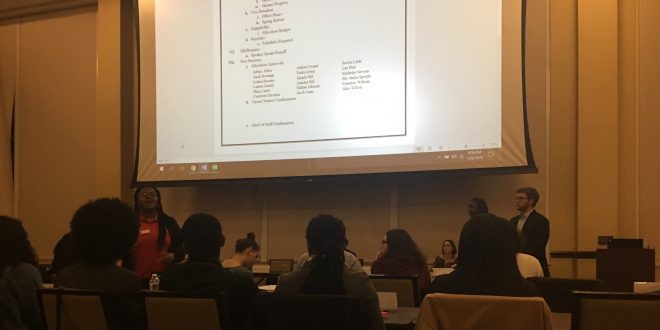 This may only be its second meeting of the semester, but the Student Government Association is ready to get down to business for the semester.

A final resolution to the Speaker of the Senate vote (tabled during last Monday’s meeting), a new Chief of Staff and the induction of 19 new senators were just the tip of SGA’s iceberg. After all, numerous resolutions were passed.

The current calculation policy includes all grades in a student’s final average. This even includes classes that were failed on the first attempt but passed on a subsequent one.

SGA President Jacob Bell has already scheduled two forums to discuss changes to a policy that’s “inconsistent” and “unfair” with other educational institutions’ systems in Georgia.

According to Bell, the new calculation method is a “repeat-to-replace” policy. The original failing grade will still be recorded on students’ academic transcripts, but only the latest grade will be counted towards the GPA.

SGA also made an amendment to “I Caught You Caring”, an initiative that recognizes the good deeds of faculty and staff. It originally didn’t include students, but an act of kindness by Madelyn Corazza, Colter Mites and Marlaina Wilkinson changed that for University Police Officer Joseph Arreola.

“We got a call about a student having a bad seizure,” Arreola said. “When we arrived on the scene, it turned out we really weren’t needed at all. We encountered Maddie and the others giving the student aid and just really being there by his side.”

Bell recognized the three students for going above and beyond to help others, and proposed to create a special section for students in “I Caught You Caring”. The provision was met with unanimous approval.

When it came to filling the 19 vacant senator positions, Sen. Cassie Katen said she hopes these students actually want to help other VSU students.

“We had a lot of people last year who joined just to say they did, and they really didn’t contribute much to discussions.” Katen said. “That’s why we went through this process so intricately. We need quality senators who are passionate and will contribute.”

The next order of business was confirming the applicants for the position. Each gave an impassioned speech about what being a senator meant to them. After that, all were sworn in and given their own SGA name plates.

The speaker vote took up majority of SGA’s time. It was supposed to be resolved at the last meeting, but invalid results came in from an oversight on voting rules. Maisy Mustic and Bob Greenbaum were the race’s candidates.

Several senators gave speeches about voting for the most qualified candidate. Parliamentarian Faith McFadden said she didn’t want to be biased, but saw potential in him.

“I see him as having a sense of urgency,” she said. “From day one, Greenbaum has been putting in work and that makes him qualified for the title.”

After a lengthy discussion and revote, Greenbaum won the majority and became the Speaker of the Senate.

“I am grateful for being voted in as house speaker, and I will definitely do my best to be the speaker SGA needs,” said Greenbaum.

Then, Bell announced his nomination, Jordan Grimes, for Chief of Staff due to his work ethic and character.  The nomination was met with unanimous approval.

“I thought I would get at least one objection, but I couldn’t be happier to be the new Chief of Staff,” Grimes said. “I look forward to making this count.”