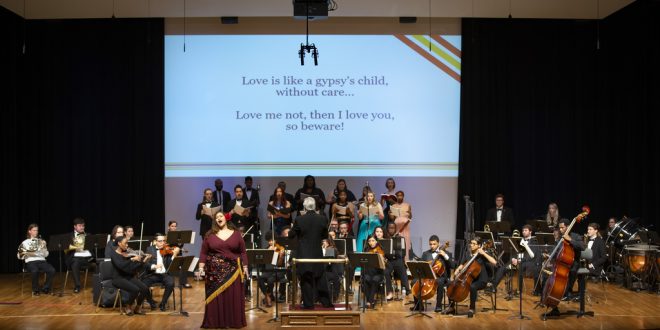 Last Saturday and Sunday, VSU’s opera students not only took the stage but also took their audience’s breath away when they performed the concert version of “Carmen.”

“Carmen,” a tragic love story by Georges Bizet, premiered in 1875. The story takes place in Seville, Spain and follows a free-spirited gypsy woman who finds herself in a love triangle that results in a dramatic ending no one saw coming.

Throughout the production, the audience encounters major themes like love, betrayal and tragedy. The main character, Carmen, longs for love and doesn’t care what she must do to get it.

Lauryn Davis, a VSU sophomore and communication disorders major, attended the show and was blown away by the amount of talent displayed.

“Her voice was very mesmerizing,” Davis said. “When she came on stage for the first act, I was not expecting her voice to be so powerful.”

But director and producer Dr. Tamara Hardesty knew “Carmen” could make an impact on its audience, and now was the time to put on the complex production.

“We had the right cast for this opera,” Hardesty said. “We had a student that could fill the role of Carmen, which is a difficult role to cast.”

Jordan Layne, a sophomore opera student and member of the ensemble, felt pleased with the performance and said that it impacted the audience in a positive way.

“I feel it is always good to show an opera or some sort of classical to bring even more variety to what people normally see,” Layne said. “I’m really proud of how our show turned out.”

The orchestra, conducted by Dr. Kenneth Kirk, left its mark on the stage as well. Musicians created live music that flowed with every note the VSU Opera students sang.

Since the opera was performed in French, a screen displayed behind the orchestra projected translations of each scene so that the audience could easily follow along with the story line.

But that wasn’t the only thing easily seen. The opera students’ main job was to sing, but they also showed a lot of emotion while doing so, which made it more entertaining to observe.

Hardesty believes that she met all her goals when it came to the execution of the production.

“The reason we decided to do ‘Carmen’ was to give students a learning opportunity and an experience performing opera,” Hardesty said. “We also wanted to bring opera into the VSU.”

With such a diverse theatrical department and it’s ability to put on shows like “Carmen,” one wonders what else the VSU Opera has in store for the future.

Previous VSU hosts Valdosta National 2019
Next Techno-Frat: Automation in the modern world and beyond