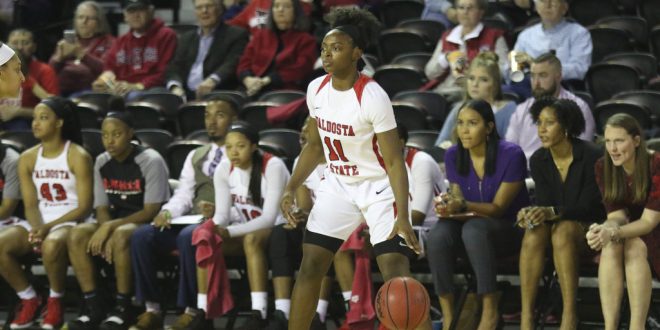 The Lady Blazers fall to 17-8 on the season, fourth in the GSC.

The story of the Lady Blazers’ 70-66 loss against the Delta State Lady Statesmen tells of turnovers and crunch time.

This matchup was as even as their last one, when the Lady Blazers edged the Mississippi College Lady Choctaws 69-60 on Feb. 14.

Turnovers made it hard for the Lady Blazers to run away with the Feb. 16 game, giving up the ball 18 times.

“I thought we played well for the most part,” Head Coach Carley Kuhns said. “In the last three-minute stretch, they capitalized on some silly turnovers and were able to steal the game from us.”

Eight out of the nine players that checked in for the Lady Blazers committed a turnover, ultimately giving up 21 points.

The game was knotted at 42 at the end of the third quarter and was back and forth until the last minute of the game.

Ultimately, the Lady Statesmen outscored the Lady Blazers 28-24 in the fourth quarter.

Delta State’s Nia Johnson also proved to be too much for the Lady Blazers. Johnson scored 17 points, including 3-3 from deep, and went 6-6 from the free throw line.

The Lady Blazers struggled to deny Johnson the ball late in the game, as she knocked down four of her six free throws in the last minute of the game.

“Unfortunately, we had to foul their best free throw shooter, and she did what she was supposed to do,” Lady Blazers forward Maddy Corazza said. “Time was an essence, and we lost it.”

The Lady Blazers leaned heavily on a Corazza and Kayla Bonilla duo.

Bonilla played all 40 minutes of the game, posting a stat line of 17 points, four rebounds and seven assists.

“[Corazza and Bonilla] put the team on their shoulders and willed their way to score points,” Kuhns said. “They both hate losing and are competitors.”

Kuhns also expressed her team’s need to move on.

“We have to continue to learn from our mistakes that have ultimately lost us some games, especially turnovers,” she said. “We must regroup and refocus.”

This win pulled the Lady Choctaws to the fifth spot, behind the Lady Blazers, in the Gulf South Conference standings.

The Lady Blazers have three regular season games to come, all conference matchups. They will be on the road Feb. 21 to face the second-ranked team in the GSC: West Florida.

“We’re taking it game by game,” Corazza said. “West Florida will be a tough environment, but we hope to come out victorious and win out.”