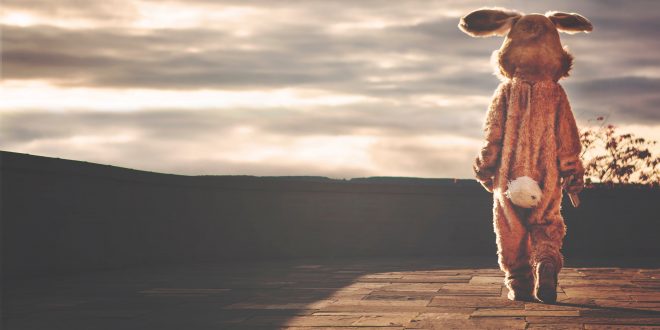 Consider the Tortoise…and the Hare…2

Tortoise vs. Hare 2: This Time It’s Personal is, at first glance, a charming 45 minute long children’s play put on by VSU Theatre and Dance, but keen observers will see it for what it is: a dark look into the deeply rooted, tribal conflicts of man.

It is set in a dystopian future after the titular race between the original tortoise and hare. This dystopia, however, is no Mad Max. No one is wearing inordinate amounts of leather or racing around the tomato patch in vehicles that would make Burning Man look like a used car dealership.

As we all know, the tortoise, through sheer determination, achieved victory over the arrogant and opportunistic hare. What the two competitors did not foresee, however, were the ramifications of their actions.

In the multi-generational wake of the competition, society has altered dramatically. The stakes of the race were high: the winner gains control over what was at the time Young McDonald’s carrot patch.

Traditionally an option afforded only to the faster and Darwinistically advanced hares, the tortoises gain control over the carrots upon winning. This is a slight plot hole which I will address. How would the tortoise figure winning by fault of the hare to make them more physically able, as a species, to avoid Young McDonald and his threats?

Regardless, the hares cede control of a major element of the food supply to the tortoises, indicating that perhaps the society in which the story takes place values honor over competence or ability, and in this way is reminiscent of feudal Japan, medieval Europe, and most earlier forms of governance, where clans set relatively close together would each have a ruler who spoke for their people. These clans would frequently argue over resources and land.

Outside of the historical context, the original race is when the tortoise and the hare learn their capacity for both self-awareness and deception. In a sense, they eat from the tree of terrible Knowledge, and suffer as a result.

For the hares, these are the dark ages. Due to the arrogance of who is essentially their ruler, they have lost a staple food supply. They experience a markedly lower quality of life under tortoise rule, substituting delicious carrots inadequately for aesthetically inferior radishes, which we all know are putrid and inedible. They have journeyed to the underworld; the heart of darkness.

This is also an ultimatum for the hare clan. They have been given a wondrous opportunity to own up, to take responsibility for a devastating and embarrassing loss. They could have accepted nobly the fact that life is nothing but suffering, and that the road to enlightenment is bombed-out, covered in barbed wire, and often deadly.

They could have. Instead, generations of hare after the Fall have sunk into pitiful lethargy, refusing to do anything but complain about their sorry state of affairs and resent those who are more successful, as Cain resented Abel. The great nail of vice has been struck deep into their hearts.

Society functions off-kilter this way for quite some time until the great-granddaughter of the original hare, no doubt of noble blood, seeks to gain back her clan’s honor by challenging a descendant of the original tortoise to a race.

Honor being of paramount importance, the tortoise accepts, and both parties go about making preparations for the race.

A woodchuck and a serpent, friends of the hare and the tortoise respectfully, aid them in their preparations. It is important to understand that these are not physical animals in the context of the story but are rather abstractions.

The hare realizes her society can no longer live oppressed, however benignly, because of her descendants. The woodchuck is an abstraction of the chip on her shoulder, the hare’s desire to atone for the sins of the father. As a result, she trains like an animal, which shouldn’t be that difficult for her.

The tortoise, on the other hand, is conditioned by the serpent, the archetypal deceiver, to trick the hare and gain victory.

This suggests that any amount of vices or virtues are cross cultural. Assuming that the animals also serve as abstractions of human qualities, it suggests on a larger scale that no human is immune from evil. It suggests also that no human is infinitely consigned to darkness and malice. The story of the hare is one of hope.

So it goes that the race takes place. They decide on a triathlon, figuring that the three activities will ultimately give neither species an unfair advantage.      The triathlon ultimately ends in a tie, and both participants decide to once again make the carrots a public utility. A good thing too, as Old Mcdonald was about to destroy every other crop to make room for livestock!

Balance is restored to the land, and the combined residents of the society are able to foster their community aims. It’s a satisfying ending to such a hard-hitting tail tale, and that is what makes the play so genius. It leads you to believe it is merely a 45-minute children’s story about humanoid animals racing and learning good sportsmanship.

But, make no mistake. Tortoise VS Hare 2: This Time It’s Personal is about class warfare. It is about the archetypal Hero’s Journey. It is about life, in its rawest and most complete form. It was also funny.

It’s a stark departure from the traditional paradigm of theatrical production, which oftentimes fail to apply in a broader social context. It’s gritty, bleak and grim, but perhaps just what we need, and ultimately competence and morality prevail. A society is formed which is predicated not on deception, but on opportunity and community.

It may not have been what Aesop had in mind when he added Tortoise and the Hare to his vast collection of fables in 600 B.C.E., but this sequel will likely go down in history as one of the best ever, ahead of even James Cameron’s 1986 blockbuster Aliens.

Mr. Duke Guthrie has truly created a masterpiece of theatrics. It’s a bold move to be marketed towards children due to its blunt nature, but it may be just what the children of today need.

I also found it extremely charming and loved the set and costume design. Congratulations to everyone involved on a wonderful show.

Previous VSU Discovers the Past, Present and Future of Black Nurses
Next People Poll: What is Greek Life to You?