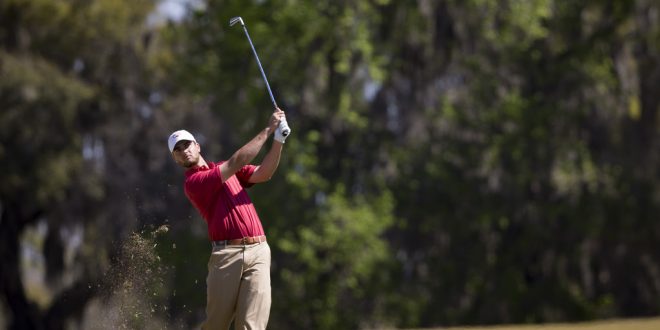 VSU will return to its typical lineup for this event.  It will consist of Senior Matt Anderson, Junior Jordan Long, and the trio of freshman: Smith, Gage Smith, and Brock Healy.

Blazers have opportunity to climb region rankings at Lake Jovita

With trees left, right and a marsh in-between, angst enters the mind far faster than any feeling of comfort when one steps onto the 1st tee at Lake Jovita’s South Course.

For the Blazers, that tiny gap of air may be all they need to secure a good place in the South Region rankings.

“We are in a good spot for Region,” Davis Smith said.  “just need to play good golf the rest of the way in.”

Getting a good start on what has been considered the “toughest starting hole in Florida,” according to the club’s General Manager Michael Johnson, will surely pick up some shots on the field at this Monday and Tuesday’s St. Leo Invitational.

Another key will be placing the ball well off the tee, avoiding trouble, and setting themselves up with ideal angles before firing into these large “velvet like greens” that cover seven acres of land.

A particular hole that demands this kind of execution is the 456-yard 6th.  A dogleg left, the distance may be somewhat deceiving, especially when you factor in the plateaus that are quite characteristic of this venue’s hilly terrain.

With trees left, some of the players will try to cut the corner off the tee, but playing it off to the right may be the safer play, even though some yardage may be compromised on this daring hole.

The green features a table top on the back right, which can make putting on its surface quite difficult.

When a player’s ball lies on the front right, an uphill battle awaits, while attempting to get it up over the slope.

More difficult is when the pin is placed on the left side of the green, according to Johnson, because the slope creates a very fast putt coming down from that top shelf.

Johnson also said the South Course’s greens run at an 11 and a half to a 12 on the stimpmeter, which is about typical PGA Tour speed.

In terms of the terrain, hole 11 is the most remarkable, with a Florida-record 94-foot drop from tee to green.

Going straight downhill, it’s a 559 listed yardage, but the players are still given the opportunity to reach the green in two.  However, the water on the right that wraps around the back provides just enough potential for trouble that it’s not necessarily an automatic green light.

That same body of water plays a factor on the next one, a 221-yard par 3 that may even play longer than that listed yardage.  Its length, water, and green side bunkers to the right and back left create a daunting tee shot with a long iron in your hand.

VSU will return to its typical lineup for this event.  It will consist of Senior Matt Anderson, Junior Jordan Long, and the trio of freshman: Smith, Gage Smith, and Brock Healy.

Long, who did not play in the Matlock Collegiate Classic in Lakeland, feels good heading into the team’s upcoming tournament.

“I feel confident about my game coming in,” Long said.  “I’ve been hitting the ball solid, just have to make a few putts to go with it, and I should have a good tournament.”

This 7,153 -yard par 71 was designed by former No. 1-ranked player and Ryder Cup captain Tom Lehman, who won the 1996 British Open and was the PGA Tour’s leading money winner that year.

With a strong field, an event of this magnitude could prove significant in the big picture.  For Davis Smith, there are major implications.

“We need to post a good score to move up for the postseason,” Smith said, referring to where they stack up in their talent-heavy South Region.

Previous Editorial: Supporting the GPA calculation change
Next Lady Blazers will have to wait for the Hurricanes