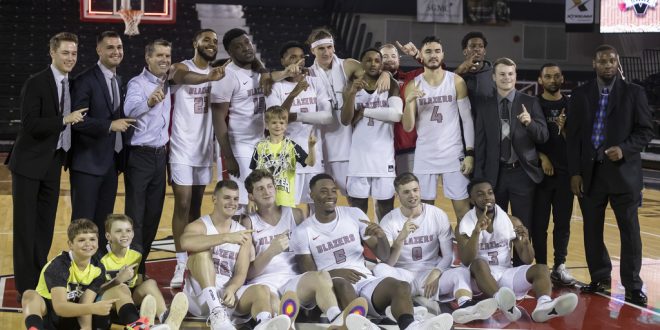 The Blazers win the GSC regular season title for the third consecutive season.

Blazers’ senior night ends with cutting down the net

Bring out the scissors.

The Blazers ended their night cutting down the nets after clinching a share of the Gulf South Conference regular season championship with Thursday’s 101-84 win over the Warhawks of Auburn Montgomery.

The Blazers came out the gate stagnant, falling behind 12-2 early in the first half.

Head Coach Helfer then substituted four of the five starters out the game to get some fresh legs on the court to create some offense.

“I was just searching to try to get a spark, knowing I was going to put the starters back in,” Helfer said. “When the second group was making a run, the starters were on the bench standing up and cheering for them. That’s when you know you have a special program.”

Usually Beau Justice is the fire marshal of the Blazers but tonight he took a backseat to Bryce Smith, who came off the bench.

Smith’s size and shooting ability created matchup problems for the Warhawks as they were forced to come out past the three-point line to guard him.

Smith knocked down his first five shots, including three from beyond the arc.

By the end of the half, Smith had already accrued 20 points and six rebounds in only fifteen minutes of action.

“I was feeling it.” Smith said. “In shootaround I hit ten threes in a row and coach has been convincing me to shoot the three all season.”

His efforts allowed the Blazers to swing the game twenty-nine points with the help of Beau Justice’s twelve points and Clay Guillozet’s eight points at halftime as they led 61-42.

The second half was more evenly matched as the Blazers just played with a lead.

The Warhawks outscored the Blazers 42-40.

The Blazers had trouble stopping the Warhawk’s leading scorer, Kenneth Keith who ended the game with 25 points, 18 of those coming from three-pointers.

“He shoots the ball so deep that you really have to stretch out to get to him,”Helfer said. “We tried to get out to the line more on him in the second half and I think that changed his game.”

Every player checked in for the Blazer Thursday in the name of Senior Night.

The Blazers now have their eyes on the GSC Conference tournament as they prepare to host the quarterfinals against No. 8 seed Union College.

“All the first-round games will be great matchups since our conference is so balanced,” Helfer said. “I think it’ll be a very difficult game we must be ready to play and stay on our toes.”

The quarterfinals matchup will tip off in The Complex on March 5 at 7 p.m.