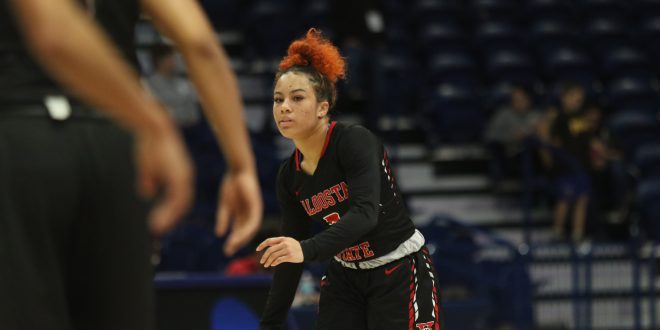 Kayla Bonilla took over the second half of VSU's semifinal matchup against top-ranked Union.

A 27-point third quarter and a career high from Kayla Bonilla was what it took to topple top-seeded Union University on Saturday.

Bonilla had a game high 30 points to lift the Blazers in Saturday’s 68-62 conference win over the Bulldogs.

After advancing to the semifinals with a 54-46 win on the road against Delta State the Blazers booked their trip to Birmingham having to face the reality that they were the slated to face a team that went 27-2 overall and 18-2 in the Gulf South Conference.

In the first half, the two teams put on a physical contest that didn’t allow either side to pull too far ahead.

Union took a six point advantage into the locker room at 30-24, but the Blazers had a mission on the opposite side of the half. The Blazers switched to full intensity—challenging the regular season champions at every opportunity.

The Lady Blazers outscored Union 27-10 in the third period to take an 11-point lead into the final quarter, largely because of Bonilla.

In the first half Bonilla picked up three fouls and had to go to the bench early. For a normal sophomore guard, the foul trouble would’ve killed their aggressiveness. For Bonilla, it caused her to embrace the moment.

Bonilla exploded for 15 points in the third quarter, going 3-3 from behind the arc, 5-5 from the field, and 2-2 from the free throw line. Her offensive output matched her defense when she disrupted two Union fast breaks causing easy rebounds for her teammates.

“[Coach] pointed at the board and said run our stuff,” Bonilla said after the game. “Our teammates lifted us up. We just have to be mentally smart and tough.”

With the win the Blazers advance to face Lee. In the only matchup between the two teams the Blazers fell, but that doesn’t give pause to the team.

The last timeVSU played in the championship they brought it home.

The game plan won’t change in the title game. The team packed for seven days. Day seven is Sunday and they want to be headed home as GSC Champions once again.

“I think we need to keep this energy that we’ve had since we started this road trip,” McIntosh said after the win. “We’re on a staycation right now. We’re trying to bring a title back to TitleTown.”

Carley Kuhns guided her team to the championship by dispatching one of the toughest teams in the conference. When you’re playing in a conference tournament you are essentially playing for your game life. The Blazers have fully embraced that mindset.

The Blazers will face Lee with an opportunity to bring back a championship from Birmingham for the second time in three years. The game will be featured on ESPN3 at 12:30 CT on Sunday.