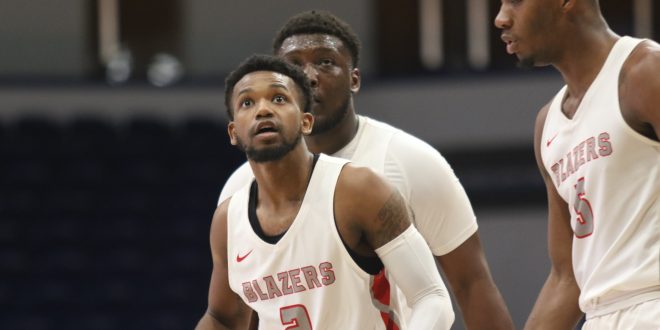 The Blazers were eliminated from the Gulf South Conference Tournament on Saturday.

Imitation is the highest form of flattery.

On Saturday, that imitation turned into a loss for the third straight season in the conference tournament.

Delta State simply outgunned the Blazers in their semifinal matchup.

The game went wire to wire but it came down to the last possession for VSU.

Clay Guillozet inbounded the ball to Beau Justice who faded towards the corner of the gym as he hoisted a three-point attempt towards the bucket. It hit the front of the rim and the tip in attempt failed as time expired.

“[The shot] felt great,” Justice said after the game. “I shoot that shot every day in practice. It goes in nine times out of ten. If you run that shot for me five times I’m going to hit it four. That was just the one that wasn’t going in.”

The loss marked the third consecutive year that the Blazers have fallen in the conference tournament and second consecutive semifinal loss to Delta.

The Blazers are known for their all-conference backcourt tandem of Beau Justice and Winston Morgan, however the duo was limited to 19 points on 4-15 shooting from the field.

Delta’s Matthew Wilson and Rasheide Bell combined for 44 points on 17-28 shooting and often running off of screens to get free, similar to the Blazers typical game plan.

“That’s the key to winning in March, you have to make shots and if you don’t make shots you’re not going to win,” head coach Mike Helfer said. “We just didn’t tonight and they did. The fact that as a group we shot it so poorly that’s surprising.”

After maintaining the lead all game the Blazers found themselves down by five with two minutes remaining in the contest.

The resilient Blazers battled that deficit away with a six point swing and sat with a one point advantage with less than a minute left in regulation.

Delta inbounded the ball to Bell, who stumbled and possibly stepped out of bounds in front of the Blazers bench. Once he regained his balance he drove down the court past all opponents and made what would be the game-winning assist to Cedric Harper.

Now the Blazers will wait for the region rankings to be released on Sunday at 10:30 ET but wherever they fall they hope not to repeat the past.

In the last two seasons the Blazers have won the regular season championship before bowing out of the conference tournament and the first round of the region tournament.

Despite the troubles that the GSC tournament has provided, Helfer still holds the regular season championship to a higher standard.