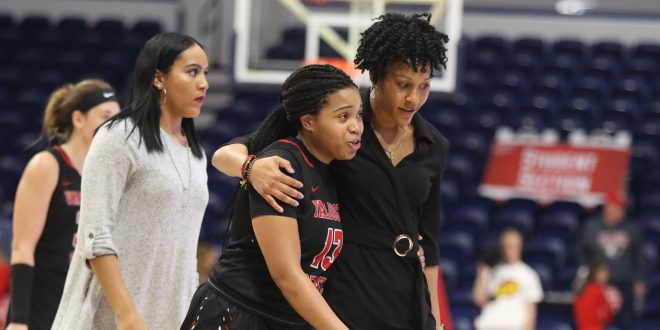 The Lady Blazers missed out on being crowned the Gulf South Conference champions after losing to Lee University 81-73 in clutch, but questionably officiated game.

The game began with the Lady Blazers up 17-10 at the end of the first quarter.

A weird turn of events happened as the referees reviewed two plays in the first quarter.

One play was for sending the wrong player for Lee to shoot two free throws, despite not being fouled.

They took the two points off the scoreboard and gave the new shooter the two free throws.

Next, they went to the review screen and assessed a technical foul on the Lady Blazers for an unnamed reason.

Shon Kitchens came off the bench and gave the Blazers their early push, knocking down two three-pointers.

Then coming into the second quarter, the Blazers froze.

They shot 2-11 in the second quarter and allowed the Lady Flames to shoot 9-16 from the field.

Altogether, they were outscored 25-10 in the second period and went into the half down 35-27.

Lee’s Abby Bertram was the biggest problem for the Lady Blazers.

The twelve turnovers they committed in the first half didn’t help them either.

After going scoreless in the first quarter, she tallied ten points in the second.

The third quarter was even with both teams scoring 21 points.

The Lady Blazers began locking in on defense and began hitting their shots.

They kept Lee at 40 percent from the field while their percentage was at 50.

Bonilla began to show life for the Lady Blazers in the third quarter.

Bonilla went for 10 points in the third quarter on 3-3 shooting.

“I don’t look for the shots, I let them come to me,” Bonilla said. “My teammates trust and wants me to take them.”

This was Bonilla’s second straight game with her biggest scoring total coming in the third quarter, while not missing a single shot.

Saturday, against Union, she had fifteen points on 5-5 shooting.

The game began to get interesting in the fourth quarter.

The Lady Blazers stormed back to tie the game twice, but timely shots and costly fouls allowed Lee to wiggle out with the win.

“They capitalized on every mistake we made, whether it was a turnover or a defensive miscue,” Head Coach Carley Kuhns said. “They hit the shots that were back-breaking.”

Lee shot 18 free throws in the fourth quarter and 44 in the entire game, compared to the Lady Blazers’ 22.

“You never want to blame things on officiating but when the foul shots are 44 to 22, that’s a pretty blatant difference, especially when we’re a team that attacks the rim,” Coach Kuhns said.

She had big help in Crystal Townsend, who scored 10 points and snagged seven rebounds (four offensive).

“You can count on her every night. She’s played all season hurt, and is still doing that,” Kuhns said. “It would be scary to see what she could do on two good legs.”

She hustled, tumbled, and put it on the line to get seven points and seven rebounds (five offensive) off the bench.

“She stepped in stepped and stepped up,” Coach Kuhns said. “This game is huge for her going forward, knowing what she can do and stepping into a bigger role next season.

The containment of duo of Abby Bertram and Haley Schubert was an issue for the Lady Blazers as the combined for 38 points on 11-27 shooting and 13-16 from the charity stripe.

The Lady Blazers season comes to an end as the will miss the NCAA National Tournament.

Since the arrival of Coach Kuhns, they have been to three straight GSC Championships, winning in 2017.