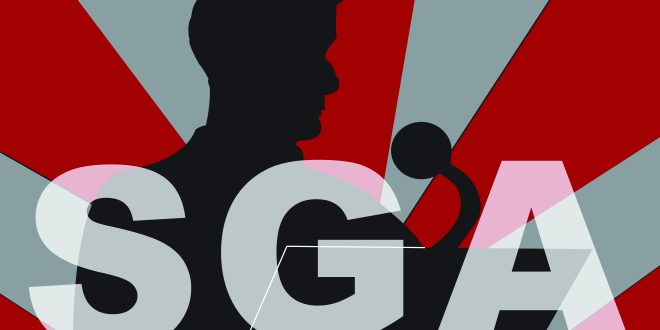 During the past six weeks, Student Government has held many delegate meetings, has passed resolutions and has made decisions impacting the student body in a positive way. Members’ continuous efforts to make students heard has paid off in such a short time period.

SGA President Jacob Bell believes the organization should be focused mainly on students’ needs and any problems they may have.

“When we came in this year, what we declared was that SGA exist for one purpose, and the purpose is to make students feel heard and valued,” Bell said. “Anything we were doing prior to that didn’t directly relate to making the students heard and valued, we’ve stopped doing.”

SGA started off the spring semester by showing its appreciation to the football team for winning the state championship.

Bell said that showing appreciation is a big part of what SGA does, which is why they’ve created a student extension for the “I Caught You Caring” program.

“We saw there was a need for students to be recognized for their acts as it relates to them going above and beyond for things that relate to citizenship, civility and integrity, which are a part of our Blazer Creed,” he said.

But the most impactful resolution, which SGA is still trying to get passed, is a change in the GPA policy. The petition SGA created to help support its proposal has garnered over 1,400 signatures in just seven days.

“The biggest thing that our team has fought to do is create urgencies around it,” Bell said. “That’s why I’ve directly communicated with the student body about it and did the petition.”

The current GPA policy calculates all class grades, including failing classes, into the final GPA. SGA would like to implement the repeat-and-replace method, which states that the highest grade will be recorded into the final GPA.

“I do think it’s a good thing,” he said. ”I just think that [VSU administrators] should take into consideration that if they’re going to introduce it this semester, then they need to give retroactive feedback for people who are actually pushing for it. “

Savanna Finney, a sophomore psychology major, said the policy is a good thing for freshman and sophomore students.

“A lot of freshmen, especially, have a hard time transitioning when they first come in,” she said. “I think it’s really good for when [freshmen mess] up, and they have that opportunity to really help their GPA.”

SGA tried to develop a forgiveness GPA policy back in 2014, but the efforts to get it passed failed. Bell hopes that this time around they’ll successfully pass it instead of waiting yet another year.

So far, SGA has passed several other resolutions, including the Step/Dance Space resolution, which now allows spaces like Oak Street Parking Deck to be reserved by organizations for practice.

D’Layna Jonas, president of NAACP, went to SGA personally about the issue and is thankful SGA was able to help.

“I feel as though SGA does an amazing job helping organizations with allocated funds and listening to students when they come with issues,” she said. “[SGA] worked day by day to make it possible that we can book those areas instead of when before we were not allowed to at all.”

Additionally, SGA is proud of how Blazer Allocation funds are being used.

SGA has handed out a total of $3,850 in allocations to organizations and students. Bell believes SGA made a lot of progress in the allocation process.

“I think we’ve made [strides] this semester in how we market the program,” Bell said. “Also, this year over last year, we’ve made sure that we’re very serious about the allocation process.”

The next thing SGA plans to tackle is a resolution for the lack of visibility of the crosswalks. Bell said it’s going to be a long process, but he’s ready to work to get it fixed.

“I see it as an urgent issue and something that has been allowed to go on for too long,” he said.

Although SGA has accomplished a lot within the six weeks, it still has a lot of time and work to put in to get more accomplishments under its belt.