Home / Campus Life / ‘We will not be silent’: Theta Zeta sends a message 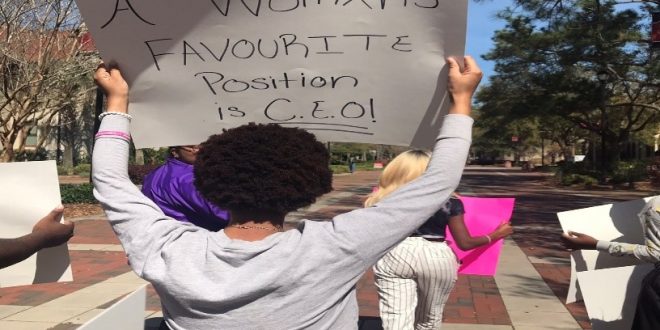 VSU students were invited to take part in the ‘Fight Like a Girl’ march on March 8 in honor of International Women’s Day.

‘We will not be silent’: Theta Zeta sends a message

“We will not be silent.”

Gabby Randolph, president of the Theta Zeta chapter of Sigma Lambda Gamma National Sorority, Inc., attests to this, as women still have an uphill battle to face before truly achieving equality.

“This march is so important to not only our chapter but women in general,” Randolph said. “Women, for all the amazing things we accomplish on a daily basis, are still not on par with the men.”

Theta Zeta feels it would be difficult to argue with that stance.

With about 15 students present, the protesters made the rounds along the pedestrian mall, Palms Dining area, the lawn and areas surrounding the Fine Arts and Communications buildings. Chanting phrases like “No pay, no way,” “The future is female” and “Who runs the world? Girls,” marchers were met with general support, as spectators sometimes raised their fists or honked their horns in solidarity.

Randolph said she dislikes the fact some people don’t know about International Women’s Day, but she’s happy to raise awareness.

“Knowing that people do hear us and are actually listening is a step towards making an equal playing field,” Randolph said.

According to statistics by the United Nations, which Randolph pointed out, women may equal men in terms of population, but they still lack representation in national and world governments.

But that’s not all.

According to World Health Organization and Rape, Abuse and Incest National Network, one in three women globally experience a form of physical and sexual violence based on their gender.

This also ties into the rise of honor killings, a term describing the murders of young women by their own family members because of a “dishonorable” action. Male family members aren’t held to the same standard.

Several countries, such as Jordan, Syria, Iran and Egypt, vie for this as a defense in the court of law, according to the United Nations’ Human Rights Commission.

To empower its march, the Theta Zeta chapter decided to invite other students to draw up posters.

Many of the posters highlighted issues of feminism, consent, pay gaps, successful women of the past and modern era and Donald Trump’s infamous monologue about the female body. Belinda Francois, a Theta Zeta member and junior psychology major, hoped these posters would make passersby think about a woman’s experience.

“As women, we go through so much, and it’s so ridiculous,” she said. “It makes no sense we still have different wages for men and women who work the same job.”

Francois noted the trend of women being labeled difficult but also noted that because women know their worth, they demand respect. She’s been a victim of this herself.

“For me personally, I have been seen as difficult at my job at Publix by my manager,” Francois said. “At my previous line of work, my male manager had a history of [allegedly] sexually harassing his female co-workers, and our female manager never believed anyone. It’s like the burden of proof is on women all the time as a society, and that’s not right.”

Even though the march was small and short, Randolph plans to do more events in March that tackle not only women’s issues but general human rights issues as well.

“We are planning on doing a lot of more student activities in the next week,” she said. “One I know for sure we are doing is our Rainbow Event on equality [on March 13]. Our other ones will be announced soon, but they will be fun and inclusive of everyone.”

For more information and updates on Theta Zeta’s events, contact members at vstategammas@gmail.com. Theta Zeta can also be reached at @vstategammas on all social media platforms.