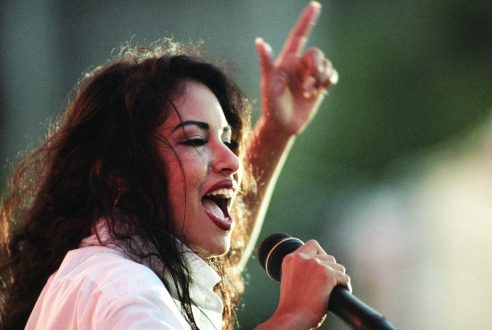 Although Selena’s life was cut short, her legacy lives on, not only through her fans but through her achievements and unique personality.

Selena was murdered in cold blood by Yolanda Saldívar on March 31, 1995, at the Days Inn motel in Corpus Christi, Texas. Saldívar fired the fatal shot after Selena had confronted her about missing funds and financial records.

Saldívar was not only one of Selena’s closest friends but also the president of her fan club and manager of Selena’s boutiques.

Selena’s determination to succeed as a female artist resulted in 67 awards, both during her lifetime and posthumously. These include the first Grammy given to a female Tejano artist and 36 Tejano Music Awards.

Aside from that, she released 11 albums, which have sold over 60 million copies worldwide.

Shortly after her death, she was inducted into the Billboard Latin Music Hall of Fame and was later portrayed by Jennifer Lopez in the biopic film “Selena” in 1997. Soon after that, her family turned its recording studio, Q Productions, into a museum full of Selena’s personally owned items and mementos. The facility has since been renamed “The Selena Museum.”

Over 20 years later, Selena continues to make her mark on the world. For the past four years, her name has made its way into the spotlight once again.

Starting in 2015, Fiesta de la Flor, an annual festival in Selena’s memory, began and has helped celebrate and preserve the singer’s legacy. The festival has raked in over $54 million thus far, excluding the 2019 festival, which will be held on April 12-13.

In 2016, MAC Cosmetics released a makeup collection in Selena’s honor, featuring products named after her hit songs, such as “Dreaming of You” lipstick, “Missing My Baby” eyeshadow and “Bidi Bidi Bom Bom” lip gloss. It sold out in minutes, becoming not only the biggest launch in MAC history but also the best-selling celebrity line of all time.

In 2017, Madame Tussauds released a wax figure of Selena in Hollywood. Then, on Nov. 3, Selena was honored with a star on the Hollywood Walk of Fame. That same year, she was featured as a “Google Doodle” to commemorate the 28th anniversary of her first studio album.

In December 2018, Netflix announced that it would release a scripted series about the singer’s life. Suzette Quintanilla, Selena’s sister, is excited to show fans a more personal side of her little sister.

“With this series, viewers will finally get the full history of Selena, our family and the impact she has had on all of our lives,” Quintanilla said.

Now, in 2019, Selena’s name is ever-growing. With the Netflix series on the rise, a newly released (and sold out) limited edition clothing line with Forever 21 and numerous other projects, the “Queen of Tejano” is capturing people’s hearts once again.

And she’s doing it so much that Texas lawmaker Ana-Maria Ramos has filed to make April 16, Selena’s birthday, an official holiday in the state.

Aside from all of the publicity circling Selena’s name, her image remains as humble and down to earth as she once was. With a smile bigger and brighter than the sun itself, Selena will forever be remembered, as will her image of staying true to oneself and never giving up.

“If you have a dream, don’t let anybody take it away, and always believe that the impossible is possible.”

This story was updated by Bryce Ethridge on April 3 at 5:53 p.m.