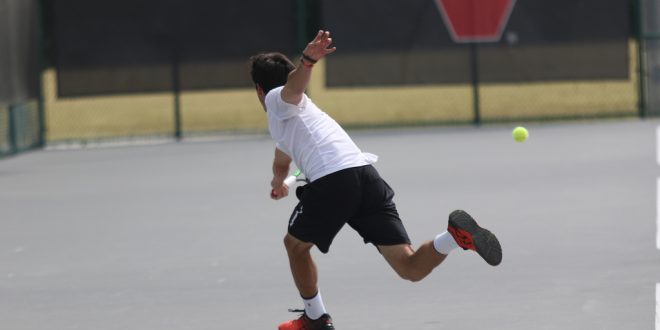 VSU started the season with high expectations, starting the season ranked in the top 10.

Gulf South Conference tennis has been put on red alert, as VSU continues to take out some their strongest opponents.

The red hot Blazers tennis team continues its winning streak, defeating back to back ranked opponents in no. 15 University of West Alabama and no. 8 University of West Florida. That is now eight straight victories, improving their record to 8-3 on the season.

VSU started the season with high expectations, starting the season ranked in the top ten. But a brutal opening season schedule, including games against the top two teams in the country, led to an 0-3 start. They’ve now battled back and are currently ranked 39 in the country, which will likely improve after a very strong weekend.

More importantly, they’ve begun to find their form at the right time as they are now 6-0 in conference play.

The team is led by seniors Jordi Mas and Xavi Pineda, ranked no. 17 and 45 respectively in singles matches in the country. In doubles, Mas and freshman Florian Simbozel have not lost a match since being paired together on March 7, with eight straight match victories.

Mas dominated over the 2 series, winning both of his matches in straight sets, including defeating West Florida’s Serdar Bojadjiev, who is ranked no. 9 in the nation in singles. His commanding serve kept him on the front foot the entire weekend.

Going forward, expect the Blazers to continue to lean on that senior experience to prepare for the conference tournament and, potentially, the NCAA tournament.

Blazers tennis will look to continue the streak on the road April 11 against Auburn Montgomery.

Previous Remembering a legend: Selena Quintanilla-Perez
Next Denmark to workout for Saints, Browns