Home / News / The next step for VSU: West hall gets an update, more on the way 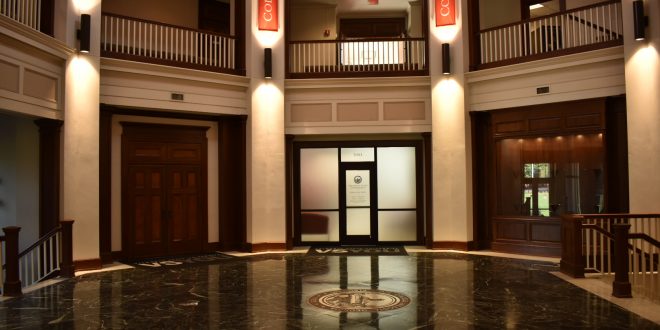 Renovations to the executive suite (formerly known as the presidential suite) finalized during spring break and allowed administrators to move in. Renovations to West Hall as a whole are not yet finished as its rotunda is still being updated.

The next step for VSU: West hall gets an update, more on the way

VSU continued its trend of “out with the old, in with the new” after the two-semester-long renovation of West Hall’s first floor left wing, finalized during spring break.

The new renovation, unveiled to the greater VSU public on March 25, saw an increase in size of the presidential and administrative suite, a glass door for semi-transparency and the loss of a hallway.

It also saw the creation of a “functional” administrative space that VSU President Dr. Richard Carvajal said is meant to “synergize,” or unite, the workplace.

The renovation was in store since his inception, but Dr. Carvajal said it was time for West Hall to get with the times. After all, it was last renovated when Dr. Carvajal was a senior in high school.

“My first month as president here—two years ago—somebody brought in some blueprint drawings [for West Hall], showed them to me, and I said, ‘No. Let’s not do that right away. Let’s wait a little while,’” he said.

Before he jumped into these renovations, Dr. Carvajal wanted to get his plan together. His first priorities included getting the Student Success Center; hiring Dr. Rodney Carr, vice president of student success; and hiring Dr. Robert Smith, academic provost.

Dr. Carvajal said once that was done he needed them to work hand in hand to help students.

“I told them on their first day when I took them to lunch, ‘I want you two to be best friends,’” he said.

To accomplish that, he needed them in the same space. Thus, the West Hall renovations came to fruition, placing its focus on unity.

“We have one senior administrator who had been here for 23 years, and she had never actually worked in the same office as her boss,” he said. “In fact, they weren’t even in the same building; they were scattered amongst three buildings.”

Dr. Carvajal said he specifically wanted to put together the puzzle pieces that were the Academic Affairs Senior Leadership Team. But more than anything, he wants to set an example for unity among VSU’s community through its own unification.

“What we understand is that synergy happens when you put people in more proximity together,” he said. “What [Academic Affairs and Student Success] do is so integral to students. If I could have them next to me or with me in a common space, that would be the best solution.”

In addition to other updates, the renovation saw changes to the rotunda, which now sports a mural showcasing graduation, flags signifying VSU’s colleges and an empty trophy case that will set VSU’s various champion trophies on the center stage.

Although the rotunda has yet to be finished, it will soon include a touch screen monitor with interactive displays for passersby, a historical exhibit replacing the boardroom and a big, red, lighted “V.”

The move-in process is still in the works as well, and administrators are still receiving furniture.

Dr. Carvajal hopes to complete renovations by May 1 and host an open house for campus to assess and absorb the updates.

But this isn’t VSU’s final update. It’s far from it, actually. Dr. Carvajal is working on another $1 million update to Odum Library, a new $18 million dollar fine arts theater and an upcoming 2019-2020 Student Union renovation.

While Dr. Carvajal didn’t reveal much about what’s to come, he did say that funding may be an issue but he and his administrative team are “working on it.”

The new updates are currently available for viewing in the West Hall rotunda and the new presidential suite in room 1004.

For more on our previous coverage of the West Hall renovation, click here. For more News, click here